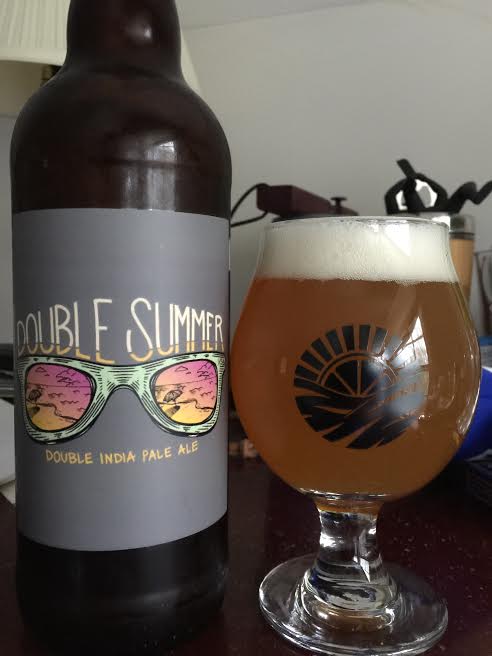 A few months ago I heard through a buddy about a new brewery out of Hull, MA. After drooling over his Instagram post, I decided to contact the brewery via Twitter and see if they had any local draught account or a place of business. I was disappointed to learn that the answer to both my questions was "No". However, it came as a shock to me as one of the brewer's messaged me and asked if I'd like to try any of their offerings.

Now, I have never been cool a day in my life, but holy hell I felt like Zack Morris on this day. Ever since I started this blog, it was never my goal to get freebies in any way, shape, or form, so a brewery reaching out to me and offering their beers for free is a huge deal.

After some back-and-forth (mostly me being lazy and not answering...sorry), I was invited to the home of one of the brewer's and I got a look at Vitamin Sea Brewing. Dino let me into his home and let me see the modest 2bbl system operating out of his basement. He warmly welcomed me into his home and shared many of his projects as I questioned an he gracefully answered. I was lucky enough to sample several beers including a stout tucked way back in his cooler, some of his cider and a homemade ginger ale (which was amazing).

As of now, there is no retail location, but Vitamin Sea is hoping for a 2018 open in Hull, MA. The idea is to move from a 2bbl system to a 10bbl system with offerings in cans as well as some other non-alcoholic options being available (including that ginger ale...orgasmic). Currently Vitamin Sea has no distribution, but they do collaborate and pour at many small beer fest all throughout New England. They collaborated on an amazing Cream Ale with Weymouth's Barrel House Z just earlier this month (Check the review right here) and they have drawn many interests from other Massachusetts breweries. Their label art is really cool and is actually done by the same person who does all of Tree House's can art.

With all that said, I was given two beers to take home (and a glass...again, HUGE thank you). Today's review is of one of their Double IPA's which is made with almost all Citra, but with a bit of Columbus too. So, to Dino, a million thank yous are in order. I really appreciate you going out of your way to give out beer to an unknown beer blogger who really has no idea what he's talking about. Dino, you are the best.

Ok, on to the review of Vitamin Sea Double Summer!

Daddy likes the aroma. I'm immediately reminded of Toppling Goliath's King Sue as orange juice, Sunny Delight, and Hi-C come forth with a lot of support from the hop bitterness. It smells just as refreshing as it is hoppy. I can't put my finger on it, but there's almost something rustic to the aroma like fresh-baked bread, whole wheat, or funky sawdust (that should be a band name). This is meant in a good way.

I didn't review this beer when I had it, but I am getting major déjà vu as Trillium's Sigtebrød comes to mind with (again) rustic qualities of burnt toast and whole wheat. In terms of juice, this has plenty of it with a lot of orange rind and orange zest. As it warms, a delicious sherbet flavor comes to light as does peach and apricot. On the back there's a big bitter hop presence which adds a nice bite to break up and add some complexity to the juicer notes.

Mouthfeel is spot-on. Carbonation is great and the body, at over 8% abv, is not thick or syrupy at all. It feels like a smaller beer without sacrificing mouthfeel or flavor. No alcohol to be found at all and this, as said before, can easily be refreshing at times.

Double Summer was a great opener for my introduction to Vitamin Sea Brewing. Based on this DIPA, I can see they are going for Juice bomb IPA's that have become a staple in the New England beer scene. If Double Summer is any indication, then Vitamin Sea is going to be just as good, if not better, than the top-tier competition in Massachusetts.