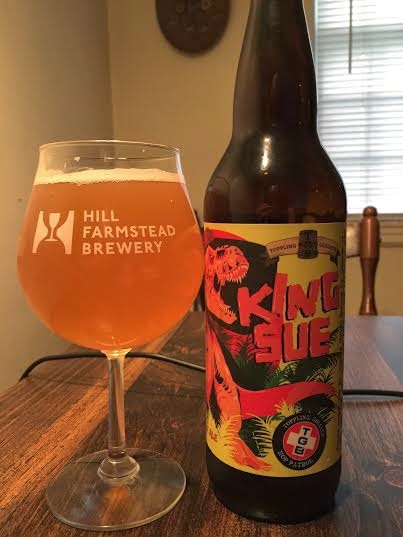 Long live the King! Toppling Goliath IPA's and Pale Ales garner much acclaim and attention, but none may be bigger than King Sue herself. It is a Double IPA brewed entirely with Citra hops.This latest release was their biggest batch yet and I snagged some of the King in a trade. Thanks, Joe! You can check out Joe's Instagram right here and see some awesome beer pics.

Pours the classic hazy, golden orange that didn't generate too much of a head, but what was there was pure white with no lacing left behind.

As soon as I popped the cap, the juice just gushed out and smacked me right in the nose. I remember being slightly underwhelmed by TG's Pale Ale Pseudosue as that was also an all-Citra beer, but you can tell they just cranked it up to 11 with the Citra in this Double. There's a slight hop bitterness deep in there, but this is just a testament to the Citra hop.

Juice Nuke!!! Wow! Without even thinking twice, this is the juiciest Double IPA I've ever had. I don't mean as in hop juice, but just pure orange and citrus juice squeezed fresh from the fruit itself. If Hi-C was a beer, then this would be it. Waves of tropical juice come crashing over the front and middle of the tongue leaving little room for your taste buds to escape. In a nice twist, the beer transitions to some herbal and grassy notes on the back and the finish which are reminiscent of a fresh-cut lawn. I had to double check the TG website as this is listed as 100+ IBU and I refuse to accept such a notion as this is not noticeably bitter thanks to the flood of Citra at every turn. Just excellent.

At 8.00%, this just crosses the Imperial IPA line and that makes sense with such a full, but mellow body that is never sticky or resiny. Even though it is 100+ IBU this is not feeling or finishing dry at all and it's actually refreshing with no unpleasant lingering flavors. It finishes clean, but not watery as it leaves enough juice and slight bitterness sticking around to assure you nothing left the palate too quickly.

Hyped beers tend to naturally come with a slight disappointment no matter how good the beer is. King Sue has annihilated that notion as it surpassed all expectations. There are Imperial IPA's I've reviewed like Trillium Heavy Mettle which are out-of-this-world Double's for containing obscene amounts of hops while still being drinkable and refreshing. King Sue is the other side of the coin with it's Ode to the Citra hop and the relentless onslaught of orange and pineapple juice. Definitely amongst, and arguably on top of the elite.