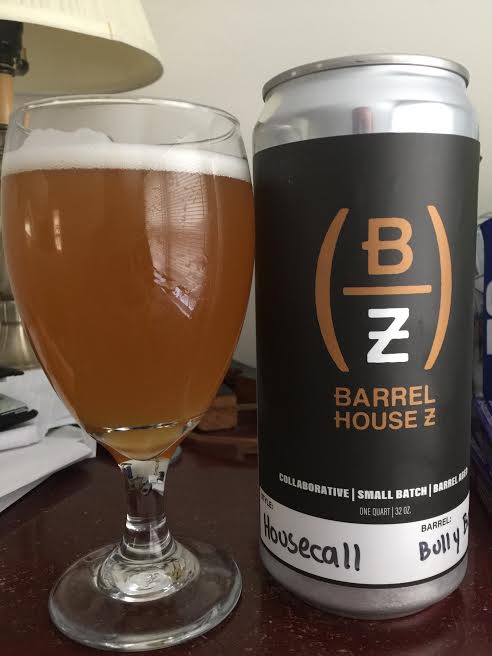 A collaboration with Vitamin Sea Brewing out of Hull, MA, House Call is an Imperial Cream Ale aged in rum barrels with vanilla beans and golden raisins.

Pours a completely hazy light orange with a finger of white head.

The aroma has ghosts of adjunct lagers past, but that's where the similarities with generic cream ales end. Raisins and dark fruits followed by a kick of rum highlight the nose and there's a dessert-like whipped cream character too.

Cream Ales are something I never really got into, but Regular Coffee by Carton Brewing was an amazing beer that opened my eyes to what can be done with this style. House Call might have usurped Regular Coffee as my favorite of the style.

This is an intense vanilla and raisin bomb if I've ever seen one. Actually, I don't think I have, so hooray for new experiences. I wasn't expecting this to be a dessert beer, but here we are. Marshmallowy (that's not a word) vanilla cream is a sugary ride throughout, but not too sweet as to make the beer off-putting. The raisins work excellently with the rum barrel for a dark fruit bonanza with even some spicyness tossed in for good measure. The dark fruits and warming rum can almost make you think this is a stellar Quad at times, but seeing that golden body snaps you back to reality. I'd almost say the vanilla with rum creates a minor pina colada experience, but if you're not into yoga and have half a brain, you should realize this is delicious on all fronts.

Mouthfeel is full and never thin at any point. On the other side, it also never syrupy or too thick. Some good carbonation bubbles move the 9.1% along nicely and you never actually get an alcohol taste. The dessert-like flavors will mask the abv, so tread carefully.

House Call was an unexpected surprise for me. I am not that into Cream Ales and rum-aged beers typically aren't my preferred barrel. This one though was seven thumbs up from start-to-finish. It's an imperial ale, a dessert beer, and a barrel-aged beer all in one. Barrel House Z has proven in a short time that they can produce a stellar array of styles and I am looking forward to the opening of Vitamin Sea Brewing in the near future.