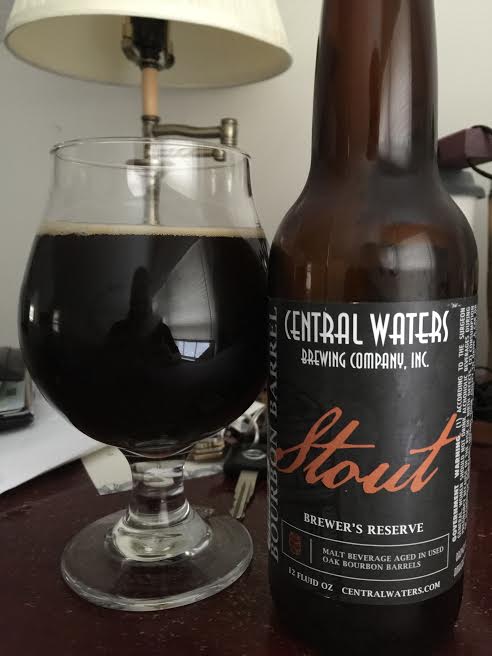 "The brewery's most sought after beer, this imperial stout is aged to perfection in oak bourbon barrels. Look for this tasty treat to contain hints of bourbon and vanilla with roasted overtones that is sure to please any connoisseur's palate. Serve this beer at cellar temperature from a snifter glass, and enjoy this expression of our passion for brewing."

Poured dark brown coming out of the glass and sits black in the glass with glowing red edges and less than half a finger of khaki-colored head.

That aroma is fantastic. Huge bourbon, oak, tobacco, cherries, some dark fruits, and coffee. Pretty much everything you want in a barrel aged stout.

The taste doesn't blow me away as much as the aroma, but it still holds strong. Bourbon is nice and sweet without being cloying, but it does contain some alcohol flavor (not too much). I get a lot of char and oak on this one which just further demonstrates the influence of the entire barrel. Pipe tobacco and smoke are also coming off of that char and the flavors work nicely even though it doesn't sound like it would. As for the sweeter, dessert flavors, there is a small hint of bitter dark chocolate, but not too much. Cherries remind me of a big Russian Imperial and underneath all of it is some molasses and brown sugar.

Mouthfeel doesn't come in as thick as I'd like (if I had a nickel), but it is still big enough to let you know it is worthy of being a BBA stout. I mentioned there was a minor alcohol flavor, but luckily it is short-lived and doesn't stick around. The carbonation moves this bad boy along.

Central Waters Bourbon Barrel Stout had a toe-curling aroma, but the taste, while complex, didn't match the nose. I feel like all the flavors on the taste were slightly muted, but I still managed to pick out so many of them. I wouldn't call it quantity over quality as I still enjoyed every sip, so don't go thinking this is a disappointing beer. It's a great BBA stout and I'm happy.