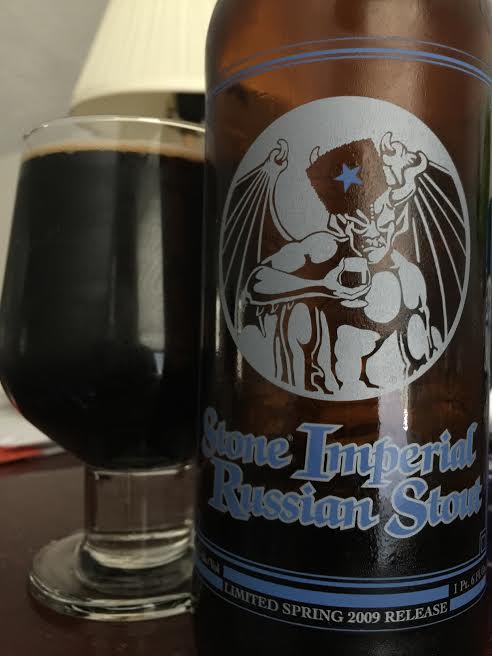 Time to drop the balloons, lock up your daughters, gather the troops, throw a load of clothing in the dryer, make room for dessert, tie a ribbon 'round the old oak tree, and prepare for takeoff because...

Can you believe three centuries-worth of beer reviews have come and gone? Neither can I. I'll admit I've had a lot of fun passing off my alcohol dependency as a blog for the past 299 reviews and I always like to bust out something special for each centennial. Looking through my collection (more like a small gathering), this one caught my eye. It's not that Stone's Imperial Russian Stout is hard to get (far from it), but I recall picking this one up on a trip to Vermont years ago. It was a vintage bottle back that already had a few years on it, but I tucked it away for no good reason. So I figure, why not for #300? This could also be a nice little experience with aging a beer for a prolonged period of time. My most recent memories of Stone IRS is that it is a rich and velvety Imperial Stout, but I've never had one that is close to this eight-year vintage. It's been sitting in the bottle for eight years and it is just aching to get in my tummy. Cheers to all who have been here since review #1. Here's to 300 more!

"Stone Imperial Russian Stout is so thick, rich and, well, sinful, you might worry that you'll be doomed to the fiery pits just for thinking about a sip. Rest assured, however, that even though this seemingly pernicious brew is indeed as black as sin, we guarantee that no actual sin was committed in making it...you'll have to add that on your own. This massive and intensely aromatic beer abounds with notes of chocolate, coffee, black currants, anise and roastiness, and its heavy palate is nothing to be trifled with."

Have Mercy! It pours as black and thick as Jesse Katsopolis' hair. An inky black body is topped with less than half a finger of khaki-colored head.

The aroma has roasted malts and coffee with underlying chocolate syrup and some cherry and fluffy milk chocolate.

I gotta say, for having almost a full decade on it, my initial impression is that age did not produce a knee-buckling stout. That being said, it is still the great IRS we all know and love. 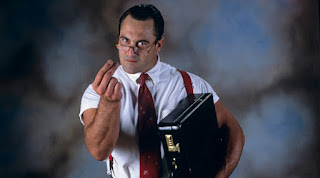 No, not that one!

More intense roasted notes are present on every inch of the palate with an almost smokey quality. More chocolate this time around, but now it's dark, rich, and bitter. The cherries are back which produce a sweet cordial flavor, but some dark fruits come to the party. I mean, they didn't bring any Chex Mix, but they're here to take up space. As it transitions, there's more coffee, but it's more like dark coffee grounds and there's even some tobacco and char. Near the end an unexpected pine or tree bark flavor comes into play, but it's not that big of a factor. Overall the roasted flavors dominate.

Mouthfeel is pretty on-point for a 10.5% Russian Imperial Stout. Despite the dominant roast, this is a smooth sipper and that abv is nowhere to be found.

So, does aging this for eight years being anything new to the table? I don't personally think so, but Stone's Imperial Russian Stout has been a staple in the market for so long and there's good reason. As a stout available at pretty much any store that sells craft beer, and is probably available any time you want it, this one packs in some robust roasted flavors with dessert-like chocolate and a kick of smoke and char. It isn't going out of style any time soon.