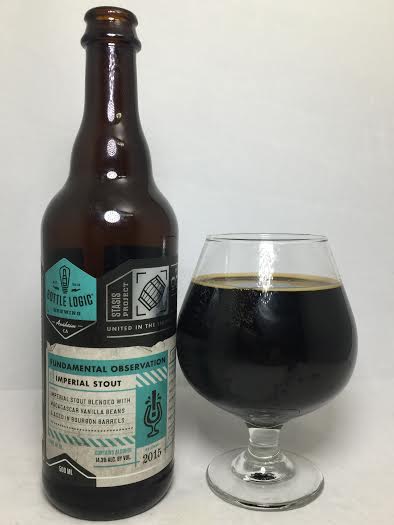 Review number 200!!! .How do we celebrate such an occasion? How about with one of the most sought after, highly demanded, highly regarded, highly rated, hard-to-find beers on the planet? Sounds good to me!

Bottle Logic Brewing finds itself in a sea of world class breweries out in California, but have recently made a name for themselves with some experimental takes on familiar styles. A few months ago they released today's beer which is a massive imperial stout aged in four different bourbon barrels with Madagascar vanilla beans. The hype exploded immediately on this one and I decided to throw my hat into the pool of trade offers. Luckily, someone out west was interested in my Hill Farmstead Civil Disobedience 6 and I got a trade done.

Pours all black everything except for the barely-there dark brown head. No hints of even brown or ruby red on the edges as this is just a black hole.

Wowzer that aroma does not disappoint! The chocolate notes of the stout plus the absurd amount of vanilla have me thinking a liquid s'more. Marshmallow just explodes out of the glass and is bigger than the bourbon. I think bourbon is being overshadowed by the vanilla, but it smells so heavenly I don't even care at all.

Bourbon is a bigger presence on the taste, but that doesn't mean that the vanilla has diminished in any way. I think "flooded" is the correct word I am looking for here. My mouth is flooded with vanilla at every turn and it's not an overly sweet vanilla extract taste that I got from the Goose Island Vanilla Rye, but instead genuine vanilla beans without being too sugary. I don't think this was made with actual chocolate or cacao nibs or anything of the sort, but the chocolate flavor in here is hard to ignore. I mentioned a s'more-like aroma and it is here too, but the chocolate is more like a Hersehy's syrup. Frankly the chocolate syrup and the vanilla are like the toppings on an ice cream sundae...plus bourbon.

*Note to Self: Write to Friendly's and get them to work on a bourbon, chocolate, and marshmallow sundae.*

Just when you think the flavors are going away on the finish, the aftertaste kicks back in with more hot fudge and a tinge of bourbon. Spec-fucking-tacular!

Mouthfeel is not just that mouth-coating goodness you expect from big, barrel-aged stouts because not only did it taste like chocolate syrup, it felt like it too. The 14.3% is nowhere to be found with not even a warming on the chest. It is smooth sailing on all fronts.

Hype is a deadly thing in the beer world as almost nothing can usually live up to its lofty expectations. Fundamental Observation's reputation preceded it and it has surpassed the build-up. Describing this as a liquid dessert would not do it justice. At times it's almost difficult to tell that it's actually a beer instead of a mouthful of marshmallow and chocolate. I think without barrel-aging this would have been a superb dessert beer, but the addition of those four bourbon barrels provided even more complexity than we already had.