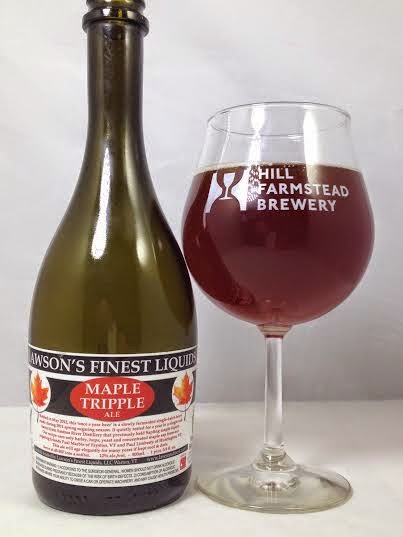 Now here is an intriguing offering. Stylistically, the most common genre it belongs to is the American Strong Ale, but even Lawson's website and beer description doesn't put a label on this rare beast. Instead of using water, this is brewed with 100% maple sap and aged for a year in oak. This is a first for me, but for review #100, it's only appropriate that I think outside the box.

Pours a murky, dark copper with practically no head.

The aroma is definitely more sap than maple syrup. There's also some big pine and a heavy amount of barley.

Whether it's maple sap, or maple syrup, this is just swimming in Vermont's finest. As much maple as there is, there's also a dark fruit, raisin, fruitcake quality that reminds me of a solid doppelbock. Hidden deep is a sawdust character that I can attribute to the oak-aging. If you were asking me what style this belongs to, I think it draws more comparisons to American Barleywines with it's similarities to iced tea and hops. As is with a lot of East Coast beers (especially Vermont), this has a big pine tree quality which is no surprise with the maple sap in the recipe. The more I sip on this and the longer it warms up, more flavors come out and it's one of the more intricate brews I've had in a while. Having said that, it needs to said that not one flavor bursts out of the glass and onto my tongue. Nothing in particular stands out, they're all just there hanging around. I can't deny their presence, but none leave a lasting impression. It's so weird that it so so complex yet so underwhelming at the same time.

The mouthfeel is thicker than most other American Strong Ales. I want to refrain from using the word "syrupy" in fear of making a bad pun, but there is a molasses-like consistency to this. I do actually pick up some decent carbonation on my tongue, which helped move the thick feel of the beer along. That pine and spruce taste tends to stick to the back of my tongue and the maple sap sticks to my lips. It sticky and carbonated yet also goes down smooth with no alcohol presence.

Maple Tripple on first smell and sip didn't indicate it would be that special. Allowing the beer to warm up brought out the array of flavors and aromas that I have not seen in the style (whatever the style is). Actually, it combines the better qualities of assorted styles into one, but stays true to Vermont with the abundance of maple and pine. Unfortunately it doesn't all come together for a robust flavor explosion. Every flavor and aroma is a pretty standard offering which are all combined into a better-than-normal melting pot. It's complexity gets it big points, but I wouldn't go as far as to call it mind-blowing on the aroma or taste spectrum. The flavors are all there, but they're all rather pedestrian. Again, complex as all hell, but no real "Wow Factor".