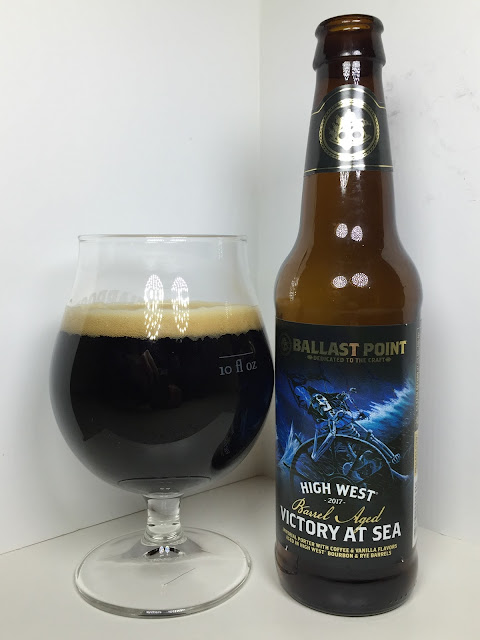 "We partnered with our friends at High West Distillery to create a barrel-aged version of  Ballast Point Victory at Sea, our award-winning Imperial Porter with cold-steeped coffee and vanilla. From a blend of Ballast Point Victory at Sea aged in High West’s own bourbon & rye whiskey oak casks, new layers of complexity emerge with notes of soft caramel and smoky oak over a dark chocolate and roasted almond body. High West crafts delicious and distinctive whiskeys to honor the American West, making it the perfect pairing with our signature San Diego-born porter."

Sits pitch black in the glass with dark brown edges and almost a finger of eggshell-colored head.

That aroma is bursting with vanilla and chocolate. The bourbon is a bit more nuanced than expected, but still accounted for. Lots of oak and a spicy rye character fight for attention, but I tell ya, the vanilla of the base beer and vanilla from the barrel create a marshmallow fluff overtone and it is awesome.

The taste is just as great as the aroma. Not surprising;y the vanilla is first in line and it still has that marshmallow flavor to it. I didn't get much coffee on the nose, but the taste is making up for lost time with black iced coffee bitterness with cream. After the vanilla and coffee, the bourbon really opens up and not to be outdone, the rye whiskey sings louder with just the right amount of spicy bite. Actually, when this was fresh out of the fridge, the vanilla, chocolate, and coffee popped the most, but as it warms, the barrel takes over. Elements of oak, char, and tobacco contribute equally and all in a big way and there's a warm, refined alcohol taste to keep things interesting. On top of all that, I am getting a good dose of plums, figs, and raisins to bring in a dark fruit bomb at the end of my bourbon and vanilla nuke. This stuff is awesome!

Mouthfeel is nice and thick and has a warming sensation on each sip. Aside from a minor alcohol taste, the 12% abv is very well-hidden. The body has a velvety texture and this is a joy to drink over the course of an hour.

High West Victory at Sea was one of the best barrel aged beers I've had in recent memory. A marshmallow, bourbon, and whiskey bomb all in one, this one competes with the best on the market. A truly complex and tasty beer, this one should be held in the highest regards. It might be the best, widely available, barrel aged beer out there.