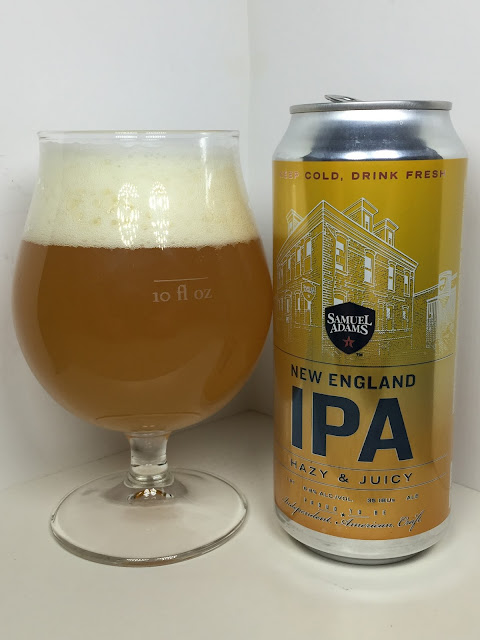 "The slight sweetness is perfectly balanced by the pineapple and grapefruit hop character, without being overly bitter. Clocking in at 6.8% ABV and a low 35 IBUs, the unfiltered IPA provides a burst of fruited hop aroma and leaves drinkers wanting another sip. In comparison to West Coast style IPAs which have prominent hop bitterness and a light, dry mouthfeel, New England IPA’s are generally known for a juicy, luscious mouthfeel and opaque, hazy appearance - and are best enjoyed fresh."

The appearane is great with a light orange color and hazy body with over two fingers of white, fluffy, dense head.

Mossy, earthy hop notes are what he me first on the aroma. A subtle grapefruit acidity and orange peel toss in some fruity hop flavors and then there's a touch of pine and sap at the end.

The taste is much sweeter than the nose. Juicy berries, blood oranges, and clementines are a nice fruit salad for the palate. A lot of herbal notes emerge here with fresh mint and then spicy black pepper swoops in too. Just as noticeable are the powdery malts which provides a solid foundation and malty sweetness is a theme throughout. I personally don't get much of the earthy notes on the taste aside from (very) faint grass and maybe some wet tree bark.

Mouthfeel is soft and comfortable with good carbonation. It has a fluffy feeling at times and doesn't feel dry. Drinkability is solid and the abv is never felt.

I think the only thing "New England" about this IPA is the look and feel as the overall malty flavors don't remind me of this "subsidiary" of a style. That being said, it is still a solid IPA in its own right with a creamy mouthfeel and complex enough of a flavor profile to satisfy the masses.