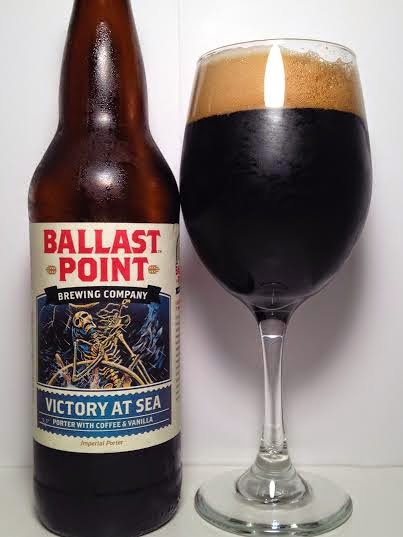 Infused with whole vanilla beans and San Diego's own Cafe Calabria coffee, Victory at Sea is a big, ballsy imperial porter clocking in at 10.00%. It has all the makings of a fine dessert beer, but we won't know until we dive in.

Pours pitch black like a stout with some dark brown on the edges. Gave off two fingers of a dark khaki, light brown head.

Huge roasted coffee to lead things off on the aroma. It's like a fresh cup of joe in the morning. The vanilla beans offer a nice compliment to the coffee and subtle chocolate flavors. Very reminiscent of a bowl of coffee ice cream. Almost a distant oak and wood smell to it too.

There's almost a mocha, espresso taste to this beer. I know it isn't brewed with chocolate, but I get that in the taste with the coffee. It's also incredibly roasty and the vanilla beans are there on the end for one final kick of a marshmallow taste. Believe it or not, I'm picking up just the slightest red wine/red grape taste too.

As an imperial porter, this coats your mouth and tongue like an imperial stout while also being light and fluffy - pretty cool how it got the best of both worlds. With such a high abv, there is a small warming sensation, but other than that, there is no alcohol smell or taste.

In terms of dessert beers, this is up there with the best of the chocolate/coffee/vanilla stouts and porters. It has a ton of flavor and it's easy to drink for 10.00%. With these cold moths on the horizon, this is one to enjoy on a cool autumn evening after a hearty meal.