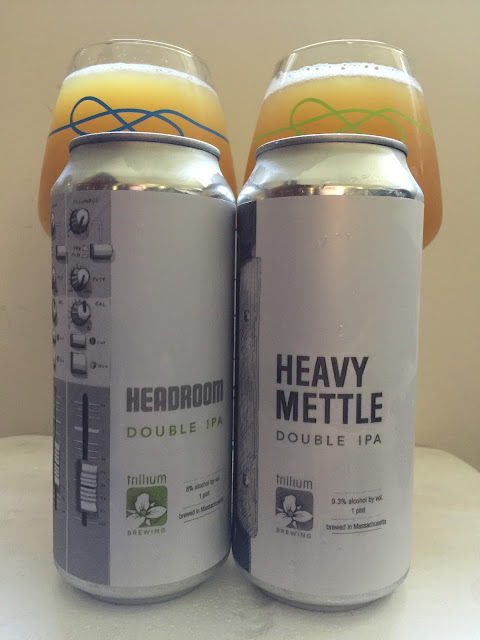 "Simply put, Headroom is the hoppiest beer we’ve ever brewed with more than 7 lbs. per barrel featuring heavy doses of Galaxy & Mosaic. This is a truly special Double IPA brewed only once a year, released during the last two summers to celebrate Hop Jam; Vermont’s annual lupulin-centric beer fest. Headroom embodies our hoppy coup de grâce (for now)- we hope you enjoy!"

"Brewed to test the Mettle of our loyal hopheads, this dank, full-bodied double IPA features intense dual additions of Amarillo and Galaxy. Bright aromatics of peach and nectarine fuse with flavors of tropical fruit and grapefruit on the palate. Accents of pine, resinous hop, and a clean bitterness reveal themselves on a smooth, dry finish."

Also has the murky, milkshake body, but this is just a shade darker in orange. This also produced a finger of white head, but the head retention was much better than Headroom.

Hop-saturated grapefruit and pine. Dank hop juices and oils combined with oranges, black pepper, and cedar. Insane amount of delicious bitterness and perhaps even some blueberry.

While Headroom was slightly more juicy than dank and bitter, Heavy Mettle just comes at you with bitterness and dank Galaxy. Headroom was more tropical with its fruits, but Heavy Mettle definitely has more stone fruits as peaches and apricots are prominent. I also think the strength of Heavy Mettle's aroma was stronger as it hit me as soon as I opened the can.

Lots of bitterness combines beautifully with creamy orange sherbet and lemon. More of that grapefruit from the aroma and a heaping dose of dank Galaxy match wonderfully. On the back end, the bitterness and hop juices really start to kick in and it's one hell of a bite on the finish. I love how this is all fruit in the front and then non-stop bitterness in the back.The transition was seamless and it combined the best characteristics from big DIPA's into one.

Without question, this is the more bitter beer, but I am in no way saying that as a negative. This has more of a piney, mossy dankness with touches of lemon. Like the aroma, the peaches and apricots come through nicely as do hints of mango. As I let the aftertaste linger, this is just a mouthful of weed-like dankness and pure hop resin. There was no real transition on this one as the entire ride from start to finish was filled with delicious bitterness.

Full and creamy body with good carbonation. There's no trace of that 8% and it leaves some residual bitterness on each sip. The fruitiness of the hops gives it easy drinkability while still packing a bitter pucnh.

Also a full and creamy body. Bitterness lingers more, which is not surprisingly given the taste. It is impressive how the 9.3% is nowhere to be found. There's not even a warming sensation on each sip, which is commendable since this nearly qualifies as a Triple IPA. Shockingly, the finish is actually pretty damn clean even after the hurricane of hops makes landfall on your palate.

Headroom struck a near perfect balance of tropical juices and bitterness. The transition was as smooth as can be and having the best of both worlds in one glass was simply sublime. To throw that many hops into one beer and still leave room for the fruity flavors to shine is astounding.

Heavy Mettle took a different approach with a bitter hop nuke that retained insane drinkability. There's nothing wrong with being all bitter hops all the time as long as you can make it drinker friendly. Heavy Mettle did just that and at almost 10%, it will seriously f**k you up if you're not careful.

So, how do you choose? Well, while I love, LOVE how Heavy Mettle can pack in so much bitterness while being easy to drink, I think the juicier Headroom just barely gets the nod for having the best of both fruit juice and dank hops. Make no mistake, they are both mind-blowing, but if I had to choose one, it would be Headroom. 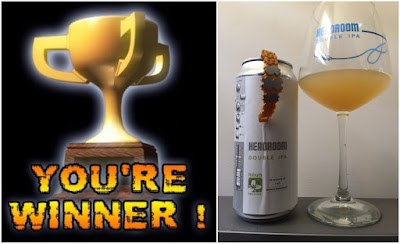 Read my previous reviews of both beers!!!

Email ThisBlogThis!Share to TwitterShare to FacebookShare to Pinterest
Labels: Imperial IPA, Trillium, Versus