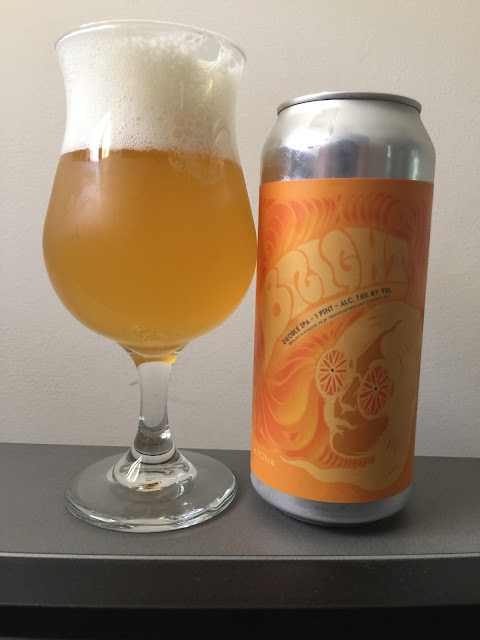 "This batch of Bright was created to be a clean and elegant showcase for a notoriously delicious hop - Citra! It is crafted with a simple malt bill and fermented with clean American Ale yeast to create a flavor profile that is more a function of its vibrant fresh ingredients than an expression of yeast character. Bright w/Citra’s aroma is a citrus explosion. The taste follows suit with notes of orange juice, grapefruit, and tangerine with a gentle finish. She is dry, soft, and adequately bittered resulting in a very approachable and thirst quenching!"

The aroma is clean and fruity with oranges, pineapple, tangerine, and grapefruit coming out to play. Reminds me of a juicy, West Coast IPA.

Tree House usually produces a great juice nuke, but this one has a hell of a lot more balance to it. It starts off with the big Citra influence of the oranges and tangerines. The clean malts are not relegated to mere supporting players, but they play just as big a part as the hops which makes for the best of both worlds. It's not just the citrus fruits I am getting from the hops, but there's a genuine hop juice character that deserves just as much credit for helping with the flavor. Just like the aroma, the taste is very clean, but not in a way where this feels flavorless and bland. It's just a very well-balanced and tasty IPA.

Mouthfeel is soft and light without being watered down. The light feel and citrus flavors make this a very drinkable IPA. While maybe not quite an Imperial IPA as it clocks in under 8%, this predictably drinks like a single IPA while packing max flavor.

Bright with Citra is something I could crush all day as its clean and juicy taste makes it something you'd want in the fridge at all times. This beer combines hop juices, citrus juices, and malts into a harmonious blend worthy of the Tree House name. Not as hyped as their other offerings, this one gets the full seven thumbs up from me.