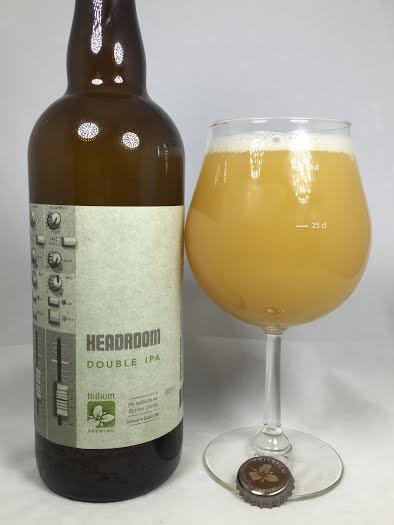 Trillium released a brand new beer today and I was actually able to make it to the brewery. Headroom is a Double IPA brewed with Galaxy, Mosaic, and Columbus hops. This beer was actually brewed for the Hop Jam beer, food, and music fest in Vermont on Saturday, August 22nd. This was thought to be just a festival-only release, but God bless Trillium who decided to allocate some of the batch for the Massachusetts faithful.

Seriously, just look at this beer. I know Trillium IPA's all have this unfiltered, hazy, murky look to them and this is no different as it looks like a dark yellow frappe (This is Massachusetts, we call it a frappe...deal with it). Yeah, beautiful.

A lot of tropical juices from the Mosaic are shining the brightest along with some cedar-like qualities and pepper. The front half is that sweet creamy orange I get with almost every Trillium IPA and it switches over to a ton of bitter, grassy hops much like a fresh-cut lawn. The bitterness was not as potent on the aroma, but the hops came through big time on the taste. It has a lot in common with the Congress St IPA with lemon and lemon acidity, but just cranked up. The finish has a delicious lingering mango juice flavor that makes each swallow a joy (giggity).

As far as mouthfeel, this is a creamy, full-bodied Double IPA. It feels like an Imperial, but not in that syrupy, resinous way. Instead it is almost pillowy and fluffy, but strong and firm enough to remind you this is a big IPA. At 8.00%, the alcohol is nowhere to be found and my 750ml bottle disappeared (dangerously) in no time.

I've come to stop being surprised at the quality of Trillium IPA's, but I still have to give my golf clap to Headroom. Another great utilization of multiple hop varieties has you tasting the qualities and characteristics of each of the Galaxy, Mosaic, and Columbus. You forget this is a Double IPA due to its easy drinkability, soft mouthfeel, and abundance of juices. It's another winning IPA from Trillium and that's all you should need to know to go out and acquire this beer.