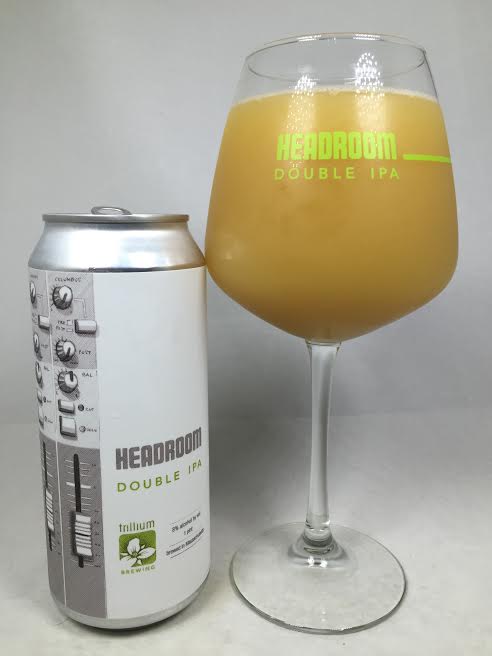 "Ladies and gentlemen, prepare your palates...

Simply put, Headroom is the hoppiest beer we've ever brewed with more than 7 lbs. per barrel featuring heavy doses of Galaxy & Mosaic. This is a truly special Double IPA brewed only once a year, released during the last two summers to celebrate Hop Jam; Vermont's annual lupulin-centric beer fest. Headroom embodies our hoppy coup de grâce (for now)- we hope you enjoy!"

Once again Trillium has brewed one of the most hyped Double IPAs I can recall in recent memory. I was lucky enough to review last year's version and thought it was another excellent beer from Trillium, but it wasn't up there with the best of the best. Clearly the rest of the craft beer community thought different as Headroom's reputation became cemented as one of (if not THE) best IPAs on the planet. Every blogger and YouTuber blew a metaphorical load over this beer and naturally the hype train went off the rails.

Since Headroom was originally brewed for Hop Jam in Vermont, it was no surprise that as the same festival approached in 2016, everyone wondered if Trillium was going to do another public release. As it turns out, everyone's instinct was correct as Trillium announced the public release last week and Saturday, August 27th was the date to mark down on the calendars. Of course I attended the 10:00AM release in Canton which turned into a zoo. At the end of the day, I had my beer and commemorative glass (thank you) and eagerly waited to enjoy such a sought after beer. 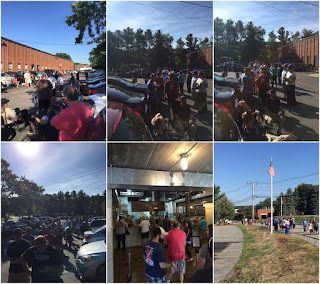 Judging by the sheer number of trade requests I have received on Instagram, Twitter, Untappd, and Facebook, it is clear that Headroom is in higher demand than clean water in Flint, MI. I don't think I've ever acquired a beer that was this much of a "must have" in the beer world. Perusing through the trade forums illustrates what lengths people will go through just to get their hands on only a couple of cans of Headroom. I have never put beer pussy on a pedestal before, so given that the hype is so real, I decided to bust out a rare Re-Review just to see if maybe I missed something the first time, or if my opinion has decided to stay the same.

Pours like a god damn milkshake and sits in the glass looking like apple cider with a dark, murky yellow body. An aggressive pour still only yielded less than a finger of off-white head.

Mosaic is screaming loud and proud on the aroma with some black pepper, cedar, and pulpy citrus. It has a lot of dank, earthy qualities and is not the typical juice bomb you expect from Trillium.

Trillium wasn't bullshitting when they said "7lbs of hops per bbl" because this is a Hop Katrina in a can. As with the aroma, this isn't the juice-forward offering that Massachusetts has become known for in the craft beer community. Dank Galaxy and that woodshop-esque taste from Mosaic are drowning the palate at every turn with no escape to be had. It's almost unrelenting with the onslaught of hops with the tropical fruits/juices playing a supporting role. A sweet sherbet flavor adds a confectionery twist to the hop overload and there's a minty, herbal flavor too. Additionally I get some pine and spruce and maybe a sprinkling of onion and garlic. It is a lot more well-balanced on the flavor than a lot of others as it incorporates flavor profiles of many other IPAs into one.

Mouthfeel is soft, full, and calm. Trillium IPAs are known (to me anyway) for being lower on the carbonation scale and this is no different. It's not flat by any means, but it's not as effervescent ($2 word) as you might want it to be. It's a hefty DIPA at 8%, but damn it drinks smaller and drinkability is sky high with no alcohol or warming to be found.

Headroom has an obscene amount of hype around it thanks mostly to the fact that it is only made once a year. Judging it on its own merits and factoring in my experience from last year, I still think my original review and score from a year ago is just as true today. It is an excellent DIPA from a brewery that just cranks them out on a regular basis. Is it the best Trillium has to offer? That's just a matter of opinion, but I do personally think Trillium has so many other beers that are just as good. I'm not trying to devalue how great Headroom is nor am I trying to downplay the amount of effort that goes into making it, so let's just leave the hype discussion for another time. That being said, if you do have extra cans, then you could probably get whatever you wanted on trade forums. In conclusion: my opinion hasn't changed after a year and this is still one of Trillium's best.