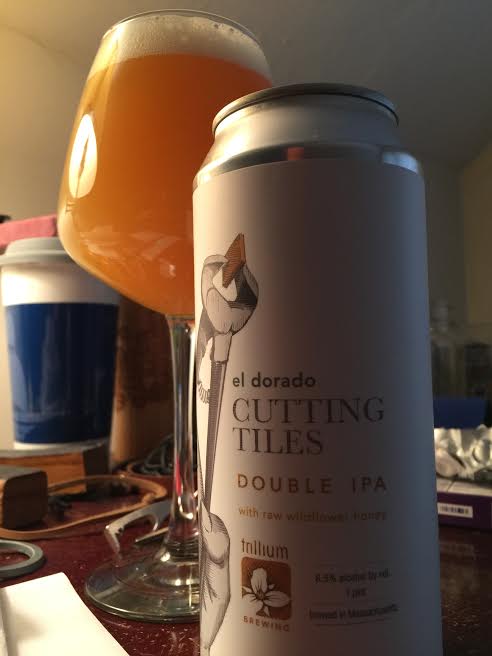 "Cutting Tiles is an exploratory series of Double IPA’s featuring a range of aromatic single hop varietals brewed with raw wildflower honey. This new version is dosed with 100% El Dorado in all kettle, whirlpool and two massive dry hop additions. The local wildflower honey keeps the body light and drinkable but provides a earthy backbone. Lime zest, orange creamsicle, and pineapple on the nose. Flavor follows with citrus and subtle rose character."

I've reviewed (I think) all of the Cutting Tiles variations on this blog (Citra, Galaxy) and if I'm not mistaken, the Mosaic Cutting Tiles is just a re-named Artaic. But hey, it wouldn't be the first time I was wrong, but whatever. So, this series is basically taking a great Double IPA with tons of wildflower honey and then hopping the shit out of it with any hop variety they want. Today we have the El Dorado version.

Pours your classic hazy orange with a murky body. I got more than a finger of white head.

The aroma is a juicy bouquet of clementine, melon, and bitter hop juice. Dessert flavors of sherbet and cream soda are an excellent addition as is a ton of sweet honey and beeswax.

Boy-howdy, those dessert elements from the aroma seem to have taken full control on the taste. A few times I had to make sure I wouldn't slip into a diabetic coma with each sip, but since Trillium didn't package a shot of insulin with each 4-pack, we must persevere.

Ok, I'm exaggerating for effect, but c'mon, even Hemingway had to toss some hyperbole in every now and then.

The sweeter flavors are a tale of the beeswax and honey vs the creamy orange sherbet. I faintly recall other recent Cutting Tiles variants not delivering a home run on the raw wildflower honey, but this time around this is drowning in it. To be honest, this has enough confectionery elements to be a dessert beer. After getting past those, intense hop bitterness pops in the middle of the mouth and then an earthy bite of wet grass and moss. There's also some citrus acidity and a small amount of pineapple to finish things off.

Mouthfeel has great carbonation (I used to hate Trillium's lack of it, but now they seem to have it dialed in). Despite being a hefty DIPa at 8.5%, the body is lighter than you'd expect (but not watered down), No trace of that alcohol and it retains high drinkability.

El Dorado Cutting Tiles is one of the better additions to the series. I'll admit I'm slightly biased because El Dorado is one of my favorite hop varieties, but I'm not wearing my rose-colored glasses for this one. It's a sublime combination of dessert beer and hoppy IPA while remaining easy to drink.