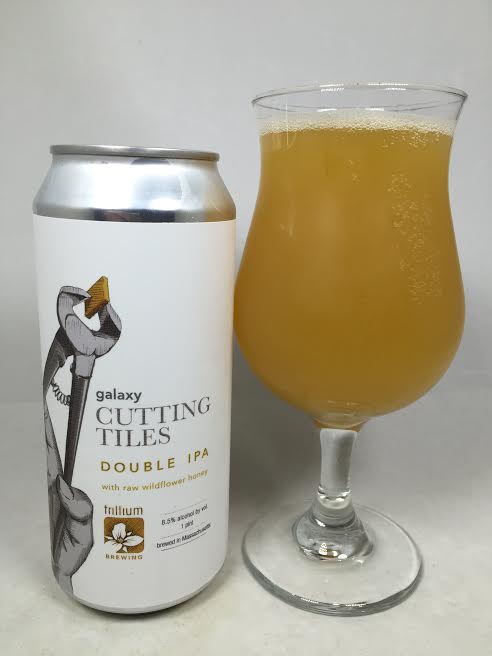 "Cutting Tiles is an exploratory series of Double IPA's featuring a range of aromatic single hop varietals brewed with raw wildflower honey. This new version is dosed with 100% Galaxy in all kettle, whirlpool and two massive dry hop additions. The local wildflower honey keeps the body light and drinkable but provides a floral, earthy backbone. Juicy, tropical fruit and nectarine up front backed up with a nuanced citrus character on the nose that continues straight through in the flavor profile. Pillowy soft mouthfeel, with a restrained bitterness on the finish. New variants to follow!"

A little while back, Trillium changed the name of their Artaic DIPA to Cutting Tiles. The idea being that this beer will now be a series where they explore different hop varieties. The regular Artiac/Cutting Tiles was an all-Mosaic DIPA made with raw wildflower honey. Now, the series will swap out Mosaic and for others while keeping everything else the same. The first variation in the series is Galaxy hops.

Pours a hazy, light orange with barely any head, but what was there was white in color.

The aroma is dank galaxy hops with a sugary sweetness from the honey. Then there's clementine acidity and other zesty citrus with plenty of hop juice and oils.

The initial pop at beginning is bitter, dank hops which are delicious and last all throughout the experience. The second biggest flavor I'm getting is a pulpy citrus juice which not only adds acidity, but also a degree of bitter, mouth puckering. Aside from the hop oils and juices, there is just a cavalcade of tropical fruits (like peaches and pineapple) that soak the palate along with light, crisp, powdery malts. The honey is more of an underlying flavor used to accent the Galaxy hops and it isn't as big a contributor as it was on the original Artaic. It is still noticeable and tastes good, but it doesn't pop as much as I thought it would. The finish is all Galaxy, all the time with a residual bitterness clinging to the back of the tongue for several seconds after each sip.

Mouthfeel is calm and maybe even slightly lacking in the carbonation department. You would never guess this nearly 9% as it drinks like a single IPA. Drinking this one quickly is easy, but the abv should make you hold back just a little.

Galaxy Cutting Tiles was a major success as a display of Galaxy hops in a big Double IPA. It has a divine combination of dank, oily hops and tropical fruits that makes this 8.5% DIPA easy to drink. I have to knock it for its slightly flat body. I've had Artiac/Cutting Tiles many, many times and the same can be said for those as well. Having had the chance to try so many Trillium IPA's which have spot-on carbonation levels, it can only lead me to the conclusion that this Artiac/Cutting Tiles series is designed to have low carbonation. I'm not saying it's a big deal, but it had to be pointed out. The honey wasn't as much of a highlight as the standard Artaic/Cutting Tiles and was reduced to a back up role. Regardless, this series is a winner and I can't wait to see how Trillium uses other hops varieties going forward.