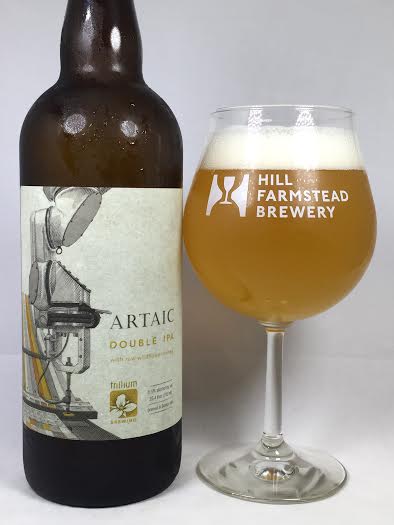 Named after the Artaic Innovative Mosaic Company that recently did their new sign at the brewery, Artaic is an all Mosaic (the trendy hop at the moment) hopped Double IPA with raw wildflower honey.

Pours on the lighter side of orange, not completely hazy and it produced a finger and a half of pure white head.

I am immediately hit with a sugary sweetness on the taste thanks in big part to the honey. Following directly after that are pineapple and orange juice. They don't last long as the earthy, dank, bitter hops take control of my tongue, but definitely not in an unpleasant way. The raw honey is giving off bees wax and pollen from the nose. If you've ever had honey fresh off the honey combs, then just put that into a beer. The mosaic hops are also contributing fresh-cut cedar and spicy pepper. I'm also getting a creme/sherbert/dessert-like flavor too. This one is hitting all aspects and it's nearly a sensory overload.

Mouthfeel is creamy and smooth - Trillium IPA's all seem to have that quality. It's full-bodied for the style and never thins out, even on the finish. Some of the hops and bitterness linger, but my burps (thanks to the carbonation) are all orange juice. It feels like a big 8.00% DIPA, but it's not intimidating in the least, even with the wide range of flavors.

Artaic is firing on all cylinders. There are DIPA's that might provide one characteristic, but hit it out of the park with that one special thing. Artaic is grabbing flavors from all corners and throwing them into a melting pot of superiority. It's one thing to use the Mosaic hop as the hop of the moment, but Trillium us using it to its fullest potential, but has added the raw honey to bring in sugary flavors to weed-like dankness, citrus, and bitter hops. Simply sublime.