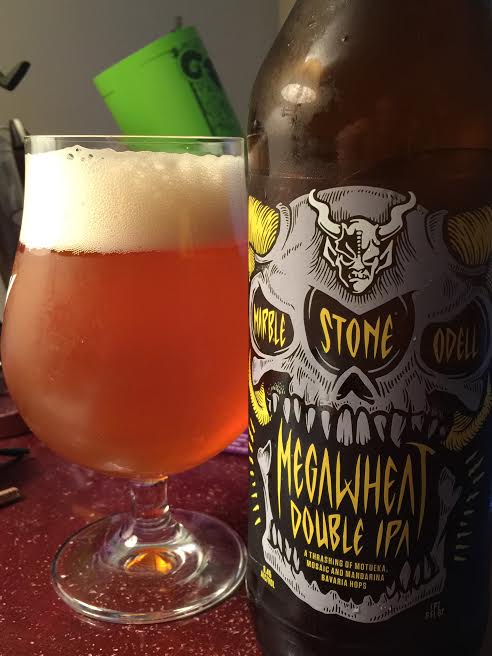 "Kick back and crank it up as we’ve done all the brewing…the we being us and the special guest appearances of two heavy hitters in the indie craft beer industry: New Mexico’s Marble and Colorado’s Odell. Credited with 58 years of brewing chops, our trio built their wheat ale foundation on the classic “C” hops. Then, we rocked a pure hop triad of “M” hops to achieve a supercharged succession of orange, tangerine, lemon, lime, spice and dankness. The undulating riffs of Motueka, Mosaic and Mandarina Bavaria hops slash through the wheat haze with equal footing, never playing over one another. The cacophony of flavor is what fans would expect with a name like Megawheat. So join us as we forge ahead on a path that directly leads to the main stage…and then off the front of it, into the crowd! If you feel the urge to smash the bottle afterward, don’t. That’s what guitars are for."

Pours a hazy, dark orange with over a finger of white head.

The biggest aroma that smacks me in the face reminds me of dry oatmeal and rustic bread. Mossy hop bitterness screams throughout each whiff with a dank ending and tons of spice.

I'm almost tempted to throw down a "Wheat Nuke" on this one, but I think I'll hold back. I have had a lot of examples of the so-called "Wheat IPA" in my time, but with this one, you might as well just drive a combine into it and harvest the ingredients. My mouth is being assaulted (not the first time I've said that) by whole grains and toasted bread. That's not to say the hops don't get their chance to show off. Some refreshing lemon and citrus are becoming more prominent as the beer warms up and I think the mossy/earthy notes from the aroma have been scaled back to more of a fresh-cut grass flavor. Actually, now that we dive deeper into this, the back end picks up a surprising dessert-like orange sherbet which was completely unexpected. The aftertaste contains delicious dank qualities and medium hop bitterness.

Mouthfeel is medium with its occasional patches of a syrupy body. No alcohol or warming to be found.

Overall this one was all wheat and bread on the aroma, but the taste had so, so much more to offer your palate. This one is nowhere near the New England style of hazy juice bombs, nor is it the classic West Coast onion and garlic. It is it's own thing and very much worthy of the name Megawheat.

To quote the late Harris Wittels: "Wheat Thins? Call me when they're "Wheat Thicks". Gimmee that wheat!"