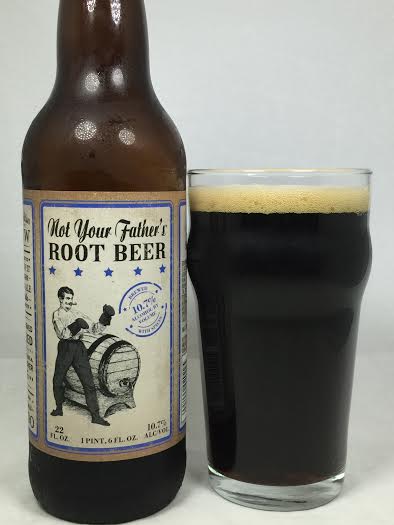 "Not Your Father’s Root Beer is a category-defining craft specialty ale brewed with unique spices. Brewer Tim Kovac’s creativity and painstaking commitment to flavor complexity results in an unmistakable offering that masterfully blends hints of sarsaparilla, wintergreen, anise, and vanilla.

Kovac passed down his family’s beer making tradition by working tirelessly with his son to craft the first version of “Not Your Father’s Root Beer.” At 10.7% ABV, the silky, smooth and satisfying finish is unmatched in flavor. It appeals to craft beer aficionados as well as those who don’t typically drink beer but crave something unique."

Pours a murky, muddy, dark brown. When held to the light it is a glowing mahogany with two fingers of eggshell-colored head that disappeared immediately.

I can tell you right now that this glass is sitting a good three feet away from me and the aroma is just as pungent as it was when I poured it right out of the bottle. It really smells like world class root beer with tons of vanilla and hints of black licorice.

If you've had the standard NYFRB then this will taste eerily familiar. The same bold, sugary flavors are here from the 5.9% version, but they are a bit more enhanced. Trying to describe root beer in a complex way is tough and this is no exception, but all I can say is that this has a delicious combination of vanilla and licorice that really packs a punch. The vanilla is dominating the first half, but on the transition to the back there's almost a minty or herbal quality which also sticks around most on the aftertaste. While sugary like soda, I actually don't mind it all that much and the lack of any alcohol (even at over 10%!) makes this taste like soda pop.

The mouthfeel is overall similar to soda, but this is not a carbonated as I would have hoped. There's also moments where it can get syrupy, but there is still enough of that carbonation presence to make it go down like regular root beer. The absence of the alcohol makes this just as easy to drink as the regular 5.9% NYFRB and that is pretty damn dangerous.

There's not much more to say about this incarnation of Not Your Father's Root Beer except that it is incredibly similar to its 5.9% brother. That being said, the flavors were a bit bolder, but one of the lone sacrifices you had to make was some subpar carbonation and a slightly thick feel at times. Those minor gripes aside, the 10.7% version is almost mind-bottling (you know, when things are so crazy it gets your thoughts all trapped, like in a bottle) with it's complete lack of any alcohol and soda-like drinkability. It's almost worthy of praise with the way it hides the 10.7% so well, but a lot of people won't take this beer (if you can call it beer) seriously due to the stigma of being "just" alcoholic root beer. I've bitched and moaned about the shit-talkers in the past, so I won't get into it again, but this stuff is deserving of your time.