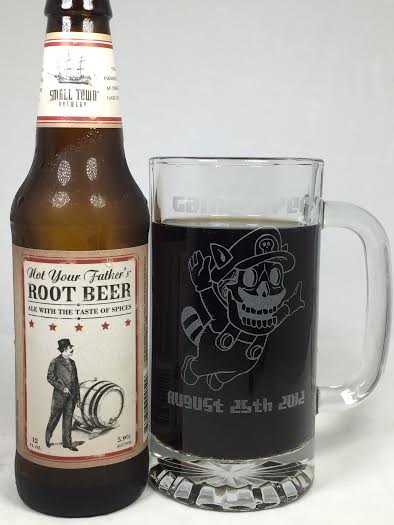 In recent years, I have never seen such a nationwide buzz over an alcoholic beverage as I have seen with Not Your Father's Root Beer. The craft beer community generated the buzz about a year ago when this was limited to the state of Illinois. Word quickly got around about a hard root beer that tasted like a standard soda. Fast-forward to 2015 and recently, Small Town Brewery signed a deal with Pabst to take NYFRB national, so every state could enjoy it. Not much info is available (to me anyway). It's advertised as an ale with spices, but I believe it is a standard root beer recipe that is then fermented like any other beer.

Pours almost pitch black, but had shades of dark brown against the light. I poured aggressively and got almost three fingers of tan, fizzy head, but it disappeared instantly just like soda.

I don't know what else to say. It smells like delicious root beer with a big vanilla kick. No alcohol at all.

Again, not much to dissect on this one. It's literally just like drinking a world class root beer with bitterness, some licorice and big vanilla extract that isn't too sweet. In contrast to to other "hard root beers" or any root beer-flavored malt beverage is the absence of any alcohol taste. In a blind test, you would not know this is nearly 6.0% abv and that is an achievement.

Mouthfeel is full of soda-like carbonation. When compared to other hard sodas or beverages, this doesn't have that syrupy body. It drinks like soda and yes, you will crush this like a standard root beer, so just be careful as the alcohol will sneak up on you as you chug this down.

NYFRB is a unique entry into the beer world (if you can even call it beer). Some may look down on this as a gimmick or they will say it belongs in the same aisle as Twisted Tea and Mike's Hard Lemonade. Well, to hell with them as this smells great, tastes great, and is not only easy, but fun to drink.