Trillium Dialed In with Chardonnay and Gewürztraminer Juice 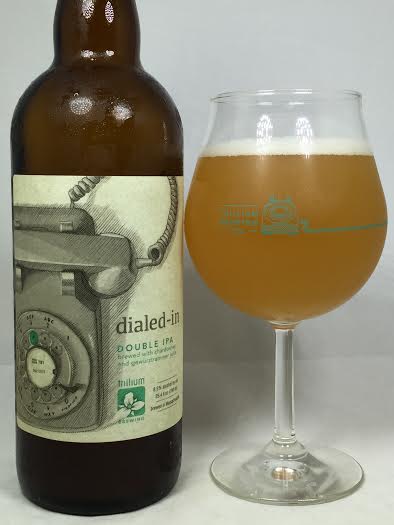 "This iteration of Dialed In is a fresh, juicy Double IPA intensively dry hopped with Galaxy and Citra. Pouring a vibrant, hazy gold; aromas of white wine, tropical fruit, and citrus swirl around the nose. Upfront flavors of grassy hop, orange juice, and pineapple coincide with vinous notes from the mid-fermentation addition of Chardonnay and Gewurztraminer juice. Soft and creamy with moderate bitterness; Medium-Light bodied with a crisp, dry finish."

This past March I attended Trillium's 3rd anniversary party. It was there Trillium released their 3rd anniversary Imperial IPA called "Dialed In". It was a DIPA made with Nelson and Galaxy hops with an addition of Sauvignon Blanc juice. Less than half a year later, Trillium has given their beer a makeover. As we see from the description above, Trillium has swapped out Nelson hops for Citra and they used a different grape juice (two actually). I had no idea that there would be variants on the 3rd Anniversary beer (let alone mere months after the first release), but I'd be interested to see Trillium continue this for the foreseeable future.

Pours a slightly hazy, glowing light orange with a finger of white head.

The aroma opens up grassy, but gives way to some pineapple, orange rind, and grapefruit. Behind all of that are fresh white grapes.

There's definitely an abundance of the grape juices on the taste. Are they overpowering the hops? Not quite, but they do seem to be the stars of this show. I can detect a small portion of dank hops from the Galaxy and they help add some much needed bitterness to this glass of wine. Then there's tons of white grape and acidic grapefruit with absolutely nothing sweet about it. A nice doughy malt taste and feel on the back end helps to diversify the flavor palette. More acidic citrus notes near the end, especially of fresh orange juice.

Mouthfeel is nice and full without being thick and syrupy. There was a lot of doughy malts on the taste, but they don't dry out my mouth. The flaked wheat makes for a creamy feel and has the beer feeling lighter than the abv would suggest.

As opposed to the first incarnation of Dialed In, this edition was not all juice all the time, which is a plus in my book. This version actually offered some bitterness to balance out the juicy hops and the Chardonnay/Gewurztraminer juice to make for a more complex brew. Just like the previous version, I hope future variants (if there are more to come) dial down (no pun intended) the level of grape juice and let the hops contribute more. I'd put this JUST behind the original Dialed In, but this is still delicious.