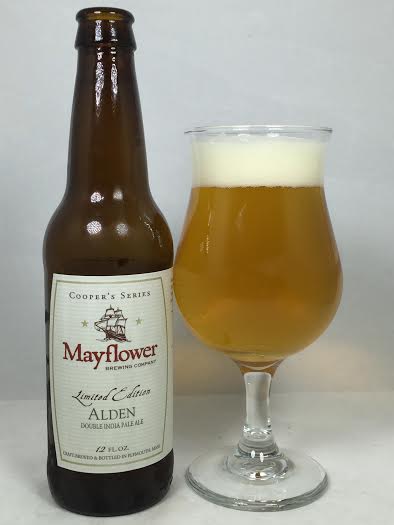 "Named after the cooper on board the Mayflower, Alden is a double IPA hopped with a hefty dose of aromatic varieties, including Chinook, Citra and Mosaic."

Grapefruit slices and blood orange on the aroma with hints of resin.

Sweeter fruity notes up front which remind me mostly of peaches and other stone fruit. Grapefruit is back, but with a nice amount of acidity along with a tiny bit of lemon zest. On the transition there's a similar taste to the Daily Ration as I get plenty of bitterness and something similar to a pale malt breadiness which carries over to the finish as it ends dry, but clean.

Mouthfeel is pretty spot-on for a big 8.0% IPA. It's full without weighing down your palate and has no alcohol presence. A crisp, clean finish is a nice change of pace to big DIPA's. The bitter finish might turn off rookies, but hop heads will surely enjoy it.

I don't have much to say about Alden, but the limited number of words I am able to muster are high in praise. Tons of bitterness with resin which are synonymous with bigger IPA's are here for the taking, but also a bouquet of fruit makes the drinkability lean towards the higher end of the spectrum. Nearly perfect mouthfeel and a clean, refreshing finish make this one of the easier-drinking DIPA's in Massachusetts while offering more than enough flavor to satisfy your taste buds.