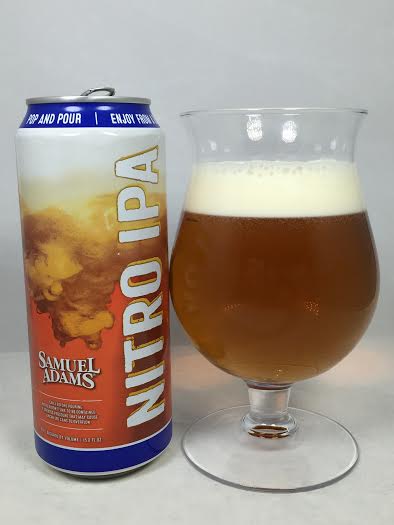 Well, we've come to the end of the Sam Adams Nitro Project and now we will take a look at Nitro IPA. After Nitro White, I am hoping this one will make the save and can show how nitro can enhance styles other than stouts.

Smells a lot like caramelized sugar and wood chips. Heavy pine sap and a little candied orange with oat bran and stale banana bread finish things off on the aroma.

Malt nuke? It's more like malts were nuked, scorched beyond recognition, and then covered in burnt sugar. Going back to the pine, this tastes like how a forest fire would smell. I swear I'm not trying to be facetious, but I can't explain what I'm tasting. Lots of caramel up front which gets to be overly sweet and there's a doughy taste taking over immediately after. The aforementioned spruce and pine tree come in for another appearance which is more like wet bark on a pine tree. I keep going back to more woodsy characteristics which aren't a smokey flavor, but again, more overly cooked than anything else. The finish is where things get really tough as an unpleasant metallic/tin can and rotten vegetable taste make this incredibly difficult to swallow. The finish is almost like drinking dirty dishwater. I've never wrung out a sponge into my own mouth, but this might be as close as it gets. Again, I am not trying to be mean for the sake of being mean or for the sake of entertainment. This is just honestly how it tastes to me.

I mean sure, the nitro does its job and makes the mouthfeel creamy and smooth, which is a positive I will give to the beer. However, the aftertaste will not go away. It's like I'm being chased through the house by a murderer and constantly yelling "Leave me alone!". I'm doing my best Louise Belcher impression with each sip. 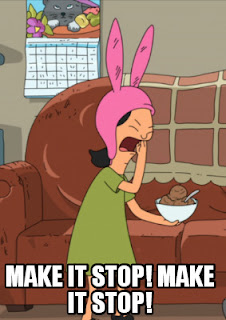 Other than that, the body is still light for 7.5% and as you can tell, drinkability is nearly 0 on a 1-10 scale. Another silver lining is no alcohol presence, so it still has that going for it.

I've reviewed all three beers from Sam Adams' Nitro Project and 2/3 of them were a fail. Nitro IPA was a mess of flavors that did not work for an IPA. Simply making it a nitro beer doesn't automatically makes it a good beer. This was as close to a drain pour as I can get without actually emptying the can into my sink. I know Sam Adams is better than this, but the Nitro IPA was thumbs down all around.