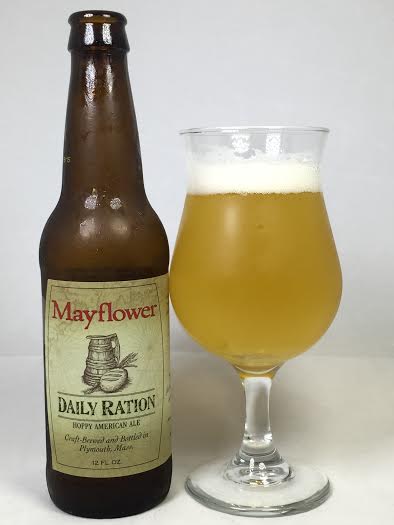 The newest offering from Mayflower Brewing is a sessionable pale ale coming in at a miniscule 4.50% and brewed with Cascade, Centennial, and Mandarina Bavaria hops.

Pours a hazy, pale yellow with plenty of carbonation and a finger of bright, white, fluffy head.

For such a low abv beer, this is surprisingly bitter. The bitterness hits the front of my tongue with a thud and grassy hops dominate throughout. Fruits are hard to find, but the biggest one I pick up is acidic lemon or lemon peel. Pale malt is also abundant as is a surprising tartness and some wheat. For such a small beer, it packs in a diverse range of flavors.

Only listed at 4.50%, this drinks heavier than its abv would lead you to believe, but is still nice and light-bodied. The random assortment of flavors surprisingly don't create any lingering unpleasantness. Remarkably, this finishes as dry as a Double IPA.

Beers with an unconventional mixture of flavors tend to be a turn-off, but I think Daily Ration still retains high drinkability despite an unusual combination of hops, yeast, and a freshly-cut lawn. The smell and initial sip had me tentative, but as you continue to drink you get used to, and enjoy, the complexity of this pale ale.