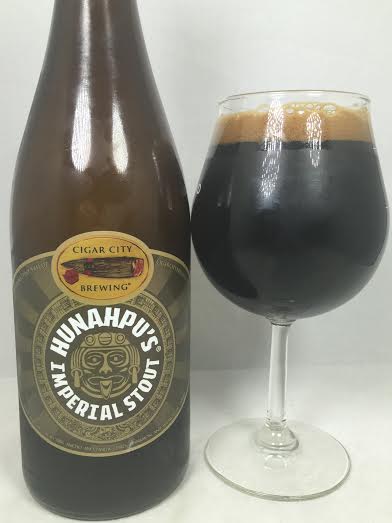 For those new to the beer scene, Cigar City Brewing out of Tampa, FL holds a party once a year called "Hunahpu's Day" which is not only a giant beer fest, but the one day a year where they release Hunahpu's Imperial Stout. I've done many reviews of the so called "Mexican Hot Chocolate Stout" that has been growing in popularity over the past several years, but Hunahpu was one of the first on the scene. Will it hold up to today's standards?

Got the classic Shane Diesel pour with a pitch black body and dark brown head.

Rich, chocolaty nose reminiscent of brownie batter. Noticeable pepper skin and subtle vanilla with some coffee thrown in for good measure. As it warmed, the cinnamon became quite prominent.

Surprisingly, the vanilla pops first on the initial sip with a sweet, marshmallow-like taste on the front of the tongue. The chocolate flavors from the aroma aren't quite brownie batter on the taste, but instead it's rich, melted dark chocolate which is akin to dark hot chocolate and the result is very cocoa powder-esque. The peppers have a lot of influence here. Not in terms of being spicy (although there is a heat sensation), but actual pepper flavor with the biggest hit coming in the middle of the tongue. Cinnamon is also here and is a nice, sugary addition to the other confectionery flavors of vanilla and chocolate. The finish is where the aforementioned heat from the peppers takes over with considerable warming and spicyness. I'm not saying that like it's setting my mouth on fire (far from it), but the warmth is most definitely noticeable and even lingers for a few seconds. The finish isn't all heat as the vanilla makes another appearance to bring the dessert to the pepper party.

Mouthfeel is thick and viscous just like a massive Imperial Stout should be. There's heat from the peppers, but not from the alcohol as the 11% is undetectable. The array of sweet flavors make this lean towards a dessert beer even with the heavy influence of the chili peppers. It drinks like a heavy stout, but also has drinkability with a velvety feel.

The so-called "Mexican Hot Chocolate Stout" has gotten more and more popular over the past few years. Hunahpu was one of the first to actually start doing it and it still holds up today. While I am usually not a fan of the style as most examples tend to favor the chili aspect the most, Hunahpu is one I would actually go back to again and again. The biggest difference with this as opposed to others is its emphasis on the dessert-like flavors of cocoa, vanilla, and cinnamon. The peppers are an accent instead of the main course and also with Hunahpu, the body is rich and thick and not watered down. So yeah, thumbs up from me on this one and its a beer that lives up to its reputation.