Ballast Point Calm Before the Storm 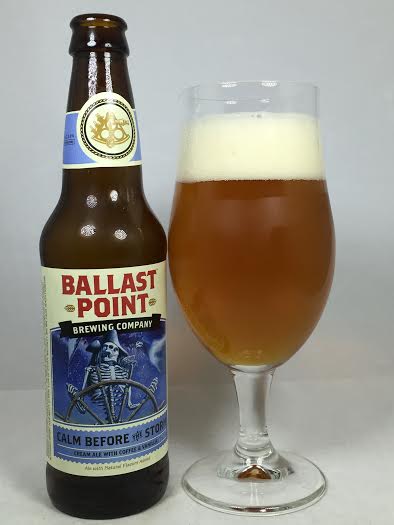 The Cream Ale is an area I have little-to-no experience in and I can't really list  any great example off the top of my head. However, Ballast Point has made a name for brewing a broad range of styles and actually delivering on them too. Very slowly, the idea of putting stout-like qualities into golden-colored beer styles has come alive lately, but few breweries can make an elite example. Hopefully BP can give us something to remember.

Pours a hazy orange with noticeable sediment floating around. I got three fingers of a fluffy white head that didn't last long.

This is the kind of beer that messes with your head because the aroma doesn't match the appearance at all. It smells dessert-like with a blast of vanilla, but also huge coffee as well and even a small bit of dark chocolate. It's not dark roast coffee, but rather coffee with cream and sugar. Very inviting.

The taste comes up a little short. The coffee is here, but nowhere near as big as it was on the aroma as only coffee bitterness seems to be the only indication it was actually here. The same can be said for the vanilla as some of the vanilla cream taste is barely noticeable and is lacking any dessert-like pop of sweetness. In addition, I am getting qualities associated more with adjunct lagers like Bud, Miller, and Coors with a corn or potato taste, pale malt, and wet grain. The finish has more of the iced coffee experience, but it's more like sucking on an ice cube that had been sitting in your cup of iced coffee.

Mouthfeel is relatively tame. Luckily the adjunct lager notes and dark coffee don't linger and spoil the experience. It can be a little watered down at moments, but it's tolerable.

Is this the new trend in the beer world, or was Calm Before the Storm just a fun experiment that won't catch on? I can't render a verdict just yet as the sample size is still small and I've had blonde-looking beers with coffee that have been really good. In this particular case, the aroma was promising, but it fell flat on the taste. It's not a terrible offering, but considering the plethora of coffee and/or vanilla beers out in the market (including a great one from Ballast Point), this one doesn't have the "wow factor" to make you return for another one.