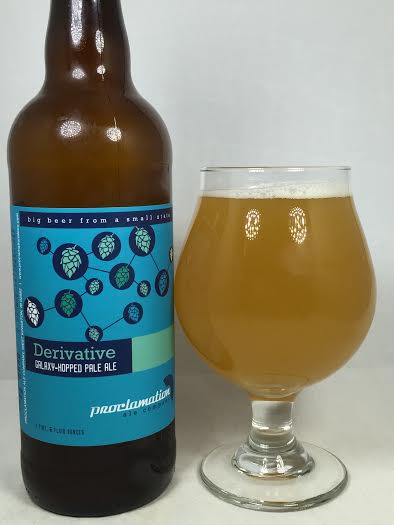 When you think New England IPA's, the states that tend to come to mind are Vermont and Massachusetts with Maine starting to hit their stride as well, but Rhode Island usually isn't one that is part of the discussion. My own personal experience with RI breweries is admittedly limited, but even I have heard buzz coming out of Proclamation Ales. My local store posted on Facebook about getting two variations on the Derivative Pale Ale, so I picked them up and figured I'd see if the Ocean State can hold their own.

The pour is a hazy dark orange. I tried to generate some head, but no matter how aggressive I was, I barely managed less than half a finger.

Earthy and grassy hops burst forth on the aroma with a little orange and grapefruit too.

A bit more of a dank, onion bite on the taste, but they are not the main attraction. A nice splash of citrus immediately follows the dankness and makes the middle of the mouth come alive with fruit hop flavors. After the citrus, the big earthy presence is back in full force as the back end of the taste is all grassy and herbal notes that contain a lot of bitterness. However, the aftertaste hits you with more onion and garlic.

Mouthfeel was relatively standard for the style, but the body felt thinned out at certain point. I wouldn't go as far as to call it watered-down, but it wasn't as full as it could have been. Alcohol is masked nicely and despite the knock against it for the feel, it is still easy-drinking.

Does Rhode Island have the goods to compete with the rest of New England? The sample size is still small for me, but Proclamation Ales is a good start with their Derivative Pale Ale. The beer utilized pretty much every flavor from the Galaxy hops, but I would have liked for the citrus to be bigger than the dank onion and not the other way around. The body could have been fuller as well, but the minor criticisms shouldn't stop you from trying this one yourself. Lord knows I will seek it out again.