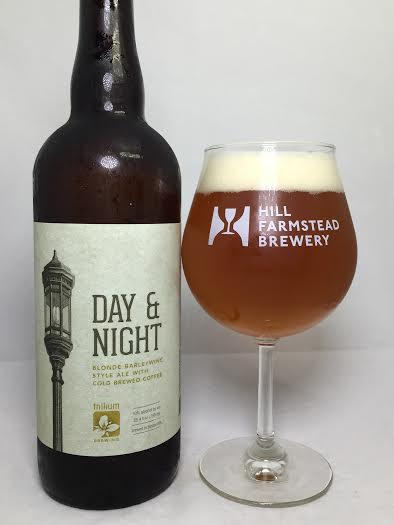 Blonde Barleywines are a fairly new entry into the beer world as is the Golden Stout. Last year I reviewed Stone's Master of Disguise which was an example of the Golden Stout and it caught a lot of beer nerds off guard. As for me, that beer didn't blow wind up my dress, but Trillium's Blonde Barleywine brewed with coffee has me scratching my head, but I am nonetheless intrigued by what is going to happen.

Fresh-brewed coffee on the aroma and really not much else. Granted, it smells nice, but all you get is coffee.

The taste has quite the grab bag of flavors. This is reminiscent of the aforementioned Stone Master of Disguise with big roasted malts and roasted coffee. The coffee isn't bitter which I believe is because it is cold-brewed (I'm not a coffee connoisseur, so ease up). Thankfully the taste has more flavor than the aroma as I get a nice pop of vanilla with just a hint of chocolate. This is also very sweet at some points as a nice, creamy caramel flavor is also noticeable which compliments the sugary vanilla and chocolate. The back end comes up a little bitter with almost a hop bite. Now that was unexpected!

I wouldn't compare the mouthfeel to the "golden stout" style that has been seen lately, but as far as barleywines go, this is spot-on. It doesn't have the mouth-coating feel of a stout, but it does have a slight syrupy texture, but with enough carbonation to move it along. At 10.00%, the alcohol is simply non-existent and I don't even get a warming sensation in my chest which is remarkable.

I didn't know what to expect from a coffee-flavored barleywine, but the end result is great. The style is associated with some caramel and toffee notes and they work nicely with the cold-brewed coffee. Some will say that the golden ales with dark flavors are just a passing fad, but if done right like Day & Night, then I say it can stick around as long as it wants to. I was surprised at the discrepancy of flavors between aroma and taste, but it ended up delivering and that's all that matters to me.