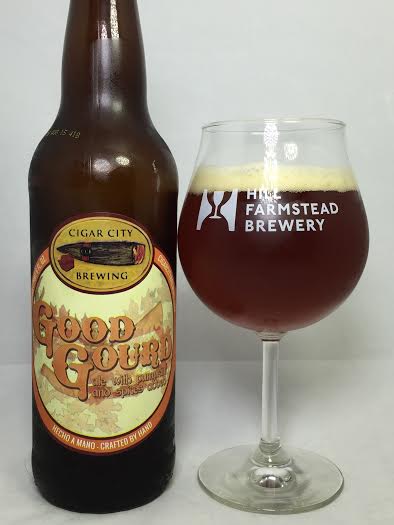 Pumpkin beers are the Nickelback of the beer community. I'll agree that most of them tend to follow the same recipe leaving no distinction between one pumpkin ale and another, but every now and then you find one that is not only better than the rest, but also better than any beer you've had in general. Enter Cigar City's Good Gourd. It's a self-described Imperial Pumpkin Ale brewed with spices. I have previously reviewed the Rum Barrel-Aged version and found that to be a pretty good, but better-than-most examples of the style. The standard version blows that one out of the water.

Pours a dark orange bordering on copper or amber. When poured it has two fingers of an off-white, eggshell head.

The spices take center stage on the aroma with big clove, nutmeg, and cinnamon all present. The pumpkin isn't overtaking the others including a sprinkling of graham cracker crust and dried flowers.

Pumpkin is a bit more prominent on the taste. Not only are the aforementioned spices of nutmeg and clove here, but I would compare the spiciness to pure rum more than anything else. Inherent with that is a slight alcohol taste, but it's a spirit taste and not off-putting. I'm certainly picking up a cream or vanilla flavor which, combined with pumpkin, reminds me of a dollop of Cool-Whip on top of a slice of pumpkin pie. The finish has a huge kick of pure cinnamon that brought a smile to my face.

At 8.50%, this is a big pumpkin ale, but it doesn't feel heavy enough to weigh you down. The flavors make full use of the weight of the abv and while some alcohol warmth is noticeable, it is easily forgiven. The amount of carbonation was noticeable on the pour and in the mouth, but it helped move the alcohol and flavors along the palate.

Good Gourd is an exceptional pumpkin ale that has backed up its reputation as one of the world's best pumpkin beers. In comparison to the Rum Barrel-Aged version, I prefer the base beer untouched as I think the rum took away from the spices and vanilla and really downgraded the standard version. It's probably the best pumpkin beer I've ever had, but it's a great beer regardless of style. It's complex and drinkable, so there's really nothing more you want in a beer.