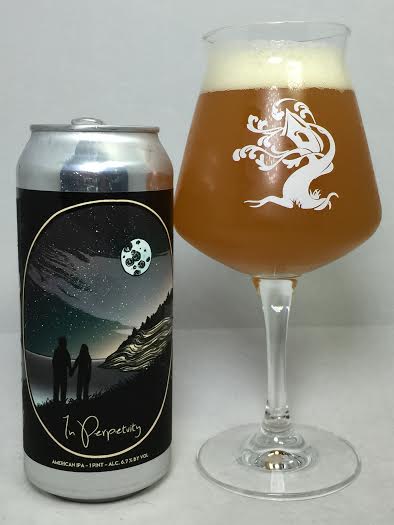 Woohoo! A brand spankin' new IPA was released from Tree House yesterday. According to the website (in Brewmaster Nate's own words), this is an American IPA brewed in celebration of his upcoming one-year wedding anniversary to his wife Lauren (who also works at Tree House). It's made with Citra and Nelson hops and was brewed "...to celebrate foreverness - in love, passion, and regardless of circumstance - the notion that what is good and beloved will last forever". Damn, now that I'm all teary-eyed, let's get rollin'!

Ripe melon on the aroma. Nelson is HUGE as I get white grape and white wine with grapefruit. Some orange peel and breadiness round it all out.

Usually if a brewery promises different hops then I expect them to show up and contribute equally. On rare occasions, if one flavor is so good it makes up for the lack of the other, then I will let it slide. This my friends, is one of those cases.

Man, this is just a Nelson Nuke! Just an obscene amount of white whine and grapefruit are bursting through my palate and it can barely keep up. There's a soft, orange creme or sherbet flavor too which I tend to associate more with Trillium IPA's, but hey, that's some great company to be in. While slightly bitter up front, the tropical juices take control in the middle and the transition on the finish has almost a lime taste to it. If I have to knock the taste for one thing, it is a lack of the promised Citra. There is a slight orange flavor to this, but it is buried beneath the (delicious) Nelson.

As with most Tree House IPA's, the feel is soft and pillowy with no unpleasant lingering flavors. This thing is getting crushed at 6.70% and I could easily have another (or two) and not be weighed down.

In Perpetuity is just another strong offering in a line of strong offerings from Tree House, but the Nelson is strong with this one. It reminds me a lot of Alpine Nelson, and if it's drawing those comparisons, then Tree House deserves a pat on the back. I'd have to knock it for a lack of a Citra hop presence, but it's hard to do when the final product is so good.