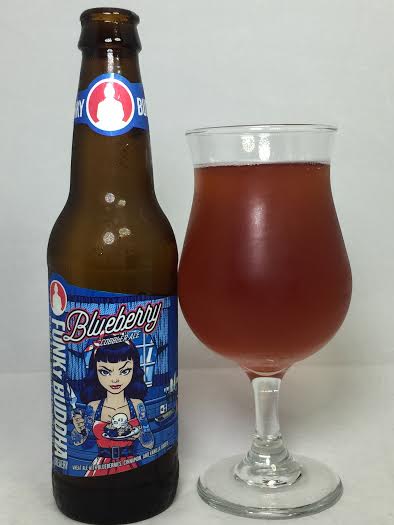 Funky Buddha is no stranger to testing the waters with their uniquely flavored beers, so why not make a blueberry cobbler ale? The "fruit/vegetable" ales aren't really my thing, but I think Funky Buddha can make one that will satisfy me. I got this an an extra in a trade, so big thanks to Sean for the bottle.

Pours a deep, dark orange with noticeable carbonation. Almost no head to speak of, but what was there was off-white.

Wow, that's a lot more cinnamon than I had anticipated on the aroma. It most certainly smells like sugary crust with vanilla and subdued blueberries. It smells like dessert and I like it.

The blueberries have a bigger presence on the taste. As opposed to the aroma where they were subdued and in the back, they are now at the forefront and are very juicy. On each sip I am getting this buttery, bready, graham cracker crust and on the transition and finish it is all cinnamon all the time. Not getting any vanilla, but I am surprised at how big the blueberries are on the taste when they were so subtle on the aroma.

Mouthfeel is light, but never what I would call watery or thin. While light at just 5.40%, this really isn't classified as "sessionable", but the amount of flavors and sweetness make it taste bigger than it is.

Blueberry Cobbler comes pretty much exactly as advertised, but it executes so well. If you want a nice change of pace for an after dinner beer instead of a stout with vanilla or chocolate, then this will substitute nicely.