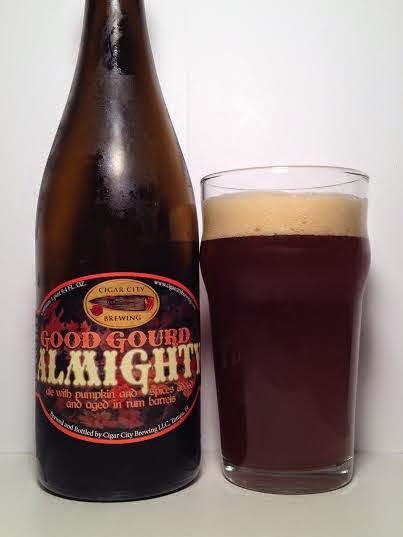 The pumpkin ale season is in full swing and do I have a treat for you. I acquired this in a trade several months ago and what makes it special is that it was available only to Cigar City's "El Catador" members, which is their reserve society. One of those members was kind enough to trade me a bottle. I've had the base beer "Good Gourd" once before and it was without question the best pumpkin ale I've ever had. The Almighty version was aged in rum barrels.

This beer immediately lets you know it was barrel-aged because as soon as I popped the cap, the smell of sweet rum filled the room. After that it is an assault of pure nutmeg. I almost thought I stuck my face in a bowl of eggnog. Deep in there is a nice helping of cinnamon, but there's even more graham cracker crust. There's almost just the faintest vanilla kick on the end. This is rum-soaked pumpkin pie.

Most pumpkin beers these days have a distinct squash flavor that dominates and leaves little-to-no room for any spices. Good Gourd Almighty reminds you of a genuine, homemade pumpkin pie with no hint of artificial flavors or sugary sweetness.

The rum is first and foremost, but there is no burning sensation at all, which took away my biggest fear with this beer (or any rum barrel aged beer for that matter). A nice wave of nutmeg and graham cracker crust are what I detect the most. I pick up a small cinnamon flavor if I try real hard, but with the rum combining with the genuine pumpkin mash and spices, I do taste some dark fruits such as raisins and figs.

11.00%? Really? while there is a tiny, miniscule sting of alcohol, this goes down too easily. There are so many flavors that I find myself chugging away. There is no alcohol burn or taste and the only thing you get is genuine pumpkin pie flavor.

While Good Gourd Almighty is an excellent pumpkin ale, I do feel that the rum does take away some of the flavors of the spices and natural pumpkin. Don't let that deter you, because as far as pumpkin ales go, this one gives you genuine spices and pumpkin flavors/aromas. If I had to describe this beer in one sentence it would be: "Take a shot of rum, and then chase it with a bite of pumpkin pie."