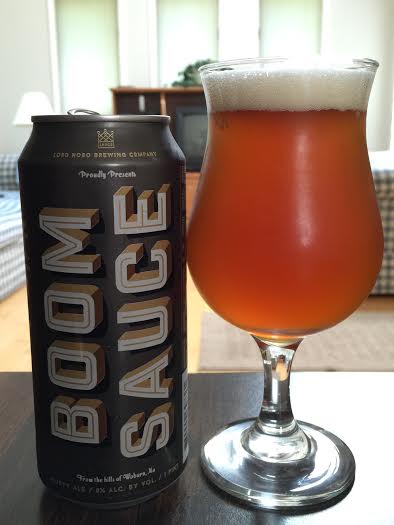 Lord Hobo is a popular craft beer bar in Cambridge,MA that offers an excellent rotating draft selection and bottle list. Owner Daniel Lanigan announced plans to open his own brewery in Woburn, MA and offer hop-forward beers that will compete with the best in Massachusetts. That dream was realized this past June when Lord Hobo Brewing opened it's doors to the public. Out of the gate is their signature offering: Boom Sauce. It's a big American IPA which is a blend of three of Lord Hobo's hoppy ales.

Pours a glowing, hazy dark orange with plenty of carbonation and two fingers of an off-white, eggshell head.

Again referring back to the Dogfish Head 90, this is a malt-forward beer if I've ever had one, but luckily the sheer amount of the dank, weed-like hops are balancing out the potential malt nuke that almost was. The malts aren't off-putting, they were just the unexpected star, but they are very sweet almost like caramel and toffee. All throughout the wet, mossy hop taste packs a punch and it follows all the way through on the finish. Drops of pine and spruce are sprinkled at every turn which is a hallmark of East Coast IPA's. When you step back and think about how well the balance is on the tidal wave of malts and hops, it's actually quite impressive.

In terms of feel, this definitely feels like a Double IPA. Medium in the mouth, but full-bodied with lingering bitterness. Surprisingly it isn't all that dry, but it's not refreshing either.

Boom Sauce is an excellent flagship offering from this recently opened brewery. I'd be remiss if I didn't mention the hype that went into this brewery and the overwhelming negative reaction it has received. While I will agree (slightly) that a brewer or brewery shouldn't promise the next big thing only because nothing can live up to your own massive build-up, I will also say that doesn't mean the beer is bad. In the craft beer world, people love to hate for no reason, especially if a brewery acts even a little cocky. I think that was the biggest reason for the backlash against Boom Sauce. Since it wasn't the best beer ever, people shit all over it and judge it more harshly than they should have. It was nearly impossible for people to set aside their prejudice and give a fair review, but you have to do so in order to give a beer a fair shake. In the end, judging solely the beer itself, this is a dank, hoppy IPA with a sweet malt presence that strikes a great balance and gives just enough fruity notes to makes this an all-around great IPA. I can't wait for the other canned offerings from Lord Hobo.