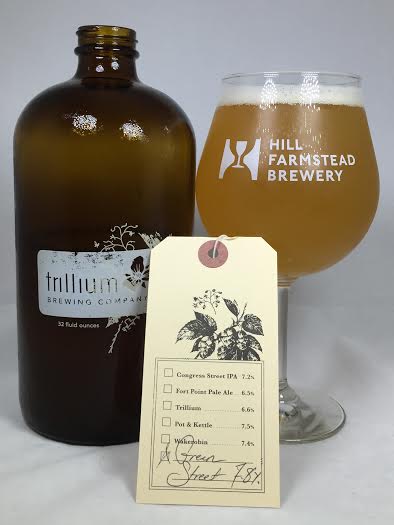 A few weeks ago, Other Half brewing out of New York did a tap takeover (or close to it) at Row 34 in Boston. Row 34 is located next to Trillium Brewing on Congress Street, so naturally, while the boys were in town, they teamed up with Trillium to collaborate on an IPA. Green Street is brewed with Valley Danko rye and double dry-hopped with Simcoe, El Dorado, and Azacca. I've tried a few beers from Other Half and have found them to merely be okay, but pretty much any hoppy beer Trillium does is gold, so I'll be interested to see if one brewery can elevate the other or one will be dragged down.

Pours a completely hazy, cloudy, murky light orange with a finger of white head. The classic Trillium haziness is a good start.

The taste is probably the sweetest beer I've had with Trillium's name on it. Going back to the aroma, there's just such a huge bubblegum/juicy fruit flavor to this. Likewise, lime is the most dominant fruit flavor that comes to me and even some mint. It's almost a hallmark of Trillium IPA's (to me anyway) to have this orange creme or sherbert quality to them and this one has that times 10. As I let the beer warm up, the hops thankfully came to the party as they add some grassy/herbal bitterness to the front of the tongue and even come back on the finish without overstaying their welcome. There's maybe some grapefruit juice in the background and the rye is also shining a bit brighter as it warms.

At almost 8.00% this doesn't drink like a beer that is pushing Imperial IPA territory. It has a nice, medium mouthfeel that is soft and almost creamy. It actually has a fair bit of carbonation as I am constantly burping as I drink. No alcohol taste and no dry finish either. It's rather refreshing.

Collaboration projects between brewers are more often than not a miss rather than a hit. I don't know what is is about two breweries teaming up to create a special beer, but usually the end result is below the standards of what each of them they usually put out. Green Street has showcased everything great about Trillium and has brought Other half to another level. While it started off sweet and almost sugary, allowing the beer to warm let every component (and most importantly the hops) to burst forward and create a wide array of aromas and flavors. It's not as hop-forward as other Trillium IPA's, but the end result is so good I don't even care.

Email ThisBlogThis!Share to TwitterShare to FacebookShare to Pinterest
Labels: American IPA, Other Half, Review, Trillium