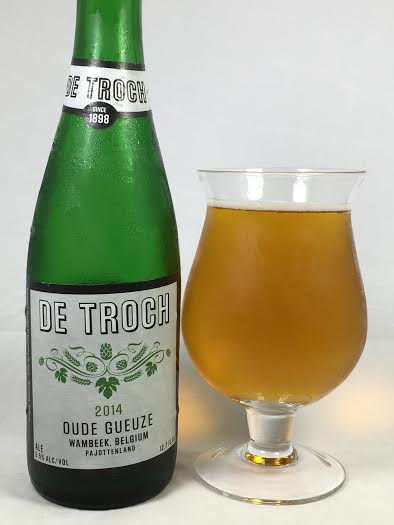 The Gueuze is considered a more intense style of Lambic due to it's blending, aging and sourness level. Just because its sour, doesn't mean it can't be refreshing as well. Known more for their line of "Chapeau" fruit beers, De Troch still produces many classic Belgian styles since their opening in the 19th century.

Pours a transparent dark yellow with practically no head and no carbonation.

Intense sour character on the nose with big vinegar followed by white grape and oak.

With a so-so appearance and ok nose, I was afraid the taste would also fall short, but things have picked up nicely here. Obviously, the sourness hits first causing mouth puckering, eye shutting, and lip smacking. After you get past that I detect a big presence of green apple and white wine with just a hint of vinegar and oak from the barrels. Believe it or not I think it has some sweetness to it which helps fight off the intensity of the sourness.

There was no carbonation on the appearance, but bubbles are dancing on my tongue for sure. It's light to medium on thw body and the tartness stays around after the finish which induces lip smacking, but at the same time it is surprisingly easy to drink, even for those who may be new to the Gueuze game.

De Troch Oude Gueuze started slow out of the gate, but the most important aspect, the taste, delivered a top notch example of the style perfect for a warm day. You don't need to be a veteran to tackle this one, but you should keep a glass of water handy. Other than that, this delivers as a tried-and-true example of a classic Belgian style.