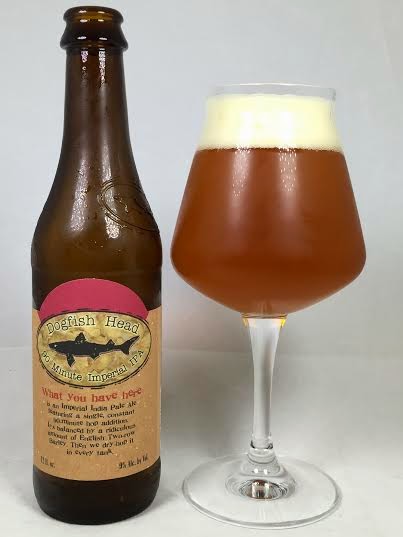 90 Minute IPA was the first beer that Dogfish Head began continuously hopping throughout out the boiling process. You may also know 60 Minute, 75 Minute, and I've previously reviewed the 120 Minute. This one though was the one that really put Dogfish Head on the map and this is still considered one the best Double IPA's out there.

Malt bomb? I'd say we're nearing Malt Nuke territory on the aroma. Not a lot of fruit on the nose, but big, sweet resin is here throughout.

The taste is noticeably, but not overpoweringly sweet. Which is good, because those abundance of malts would have taken over completely. At 90 IBU's, I must say that this isn't all that bitter to me. I do detect some herbal, almost tea-like hops with some earthy dankness, but the malts and sweet toffee flavors are stealing the show. It's impressive how this has so much complexity.

Clocking in at 9.00%, there is no alcohol presence and while it does drink like the big beer it should, the bouquet of rich sweetness and fresh hops produce a highly drinkable Imperial IPA. Carbonation is more prominent than others of the style, but this is big-bodied and (not to mention) pretty damn smooth on the finish without any cloying bitterness.

The aroma had me thinking this was going to be all malts, all the time, but the taste produced some serious complexity. Dogfish Head 90 Minute IPA is a big beer that may scare away beginners, but veterans will come to love the intense sweetness, dank hops, and creamy, full-bodied feel.