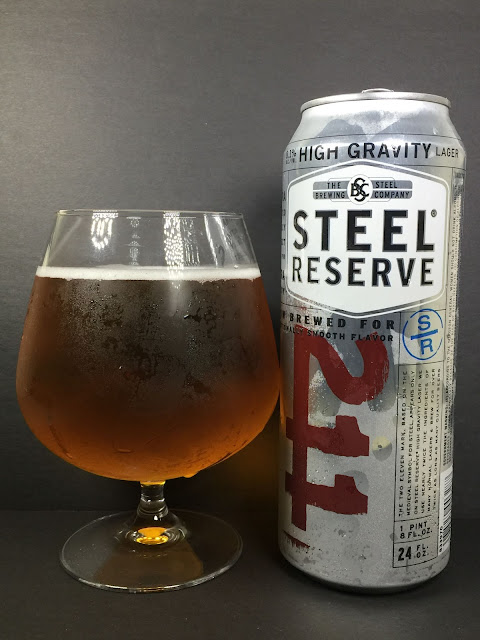 "The two eleven mark, based on the medieval symbol for steel, appears only on Steel Reserve(R) High Gravity lager. We use nearly twice the ingredients of many normal lagers & brew for over twice as long as many quality beers."

Pours out light orange in color with a transparent body. The picture doesn't show it, but it formed a solid two fingers of white head.

The aroma is reminiscent of many typical adjunct lagers with noticeable sweetness, grain, and corn. I do detect a hint of fusel alcohol, but nothing too overpowering.

The taste is sweeter than most other adjunct lagers due in part to a big butterscotch and caramel flavor that I am getting. It actually tends to mask the less desirable flavors, which to be honest, really aren't that bad. Yes the standard grain and corn from the aroma are here, but this isn't skunky-tasting or too off-putting, especially when drank cold. Even when it does warm up the taste never gets too sour or bitter. I think one of my only negatives is that the aftertaste is overly sweet with some metallic qualities, but that's only when the beer has reached room temperature.

Mouthfeel is light and surprisingly crisp for being over 8%. The "high gravity" has made for some cloying sweetness, but at the same time, this is still light and easy to drink.

Steel Reserve is one of the best malt liquors out there. Condescending assholes would say "Yeah, that's like being the tallest midget", but say whatever you want, but this was not as bad as I was expecting. If the abv was knocked down to standard macro lager territory, then this would be a go-to for those who are into these beers. In its current form, it goes down too easy for such a big beer and it will knock you on your ass in a hurry. Overall, I'm pleasantly surprised.