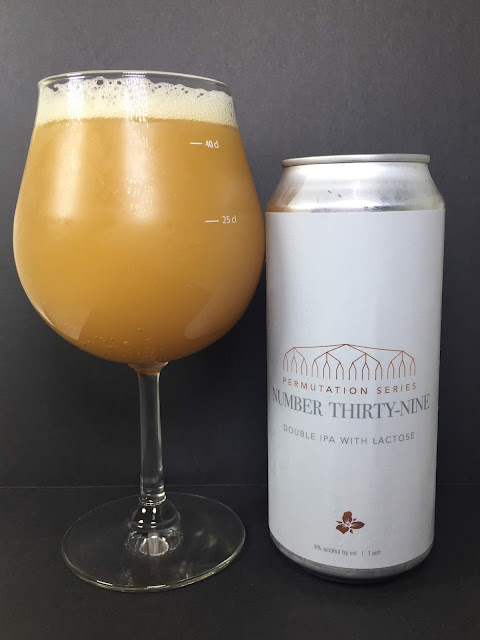 "Permutation 39 is a Double IPA brewed with lactose that delivers a hazy golden orange hue. A rush of fresh cut pineapple, orange and a sweet Mosaic hop nose set the tone, while the flavor of oranges and grapefruit pith meld into a honey character and creamy, full mouthfeel on the finish."

Pours out golden orange in color with that dirty milkshake body and a finger of slightly off-white head.

Dank hops and berries are most prominent on the aroma. The bitterness is appetizing, but is equally matched by berries, melon, and citrus zest. Lactose is hard to come by.

The taste still retains the citrus from the aroma and I get more grapefruit and other sweeter citrus notes. What else has survived from the nose? The honeydew melon is still clean and juicy, and the bitterness is produced by a delicious hop juice flavor. The lactose is much bigger here than it was on the aroma. The "milkshake ipa" craze has hit the beer scene hard and Trillium is putting their horse in the race. I do find similarities with others of a similar style with subtle vanilla notes which play off the sweet citrus flavors. It isn't the boldest example of an IPA with lactose, but the rest of the beer is fantastic, so I don't care.

Mouthfeel is creamy and so soft. No alcohol is to be found and that 8% is nowhere to be seen. Drinkability is high, but that's not a surprise with these Trillium IPAs.

Permutation 39 was a a subtle entry into the Milkshake IPA world. This one really just dips its toes in the water, but as I said before, the beer is a home run on its own without the lactose, so I am a happy camper.