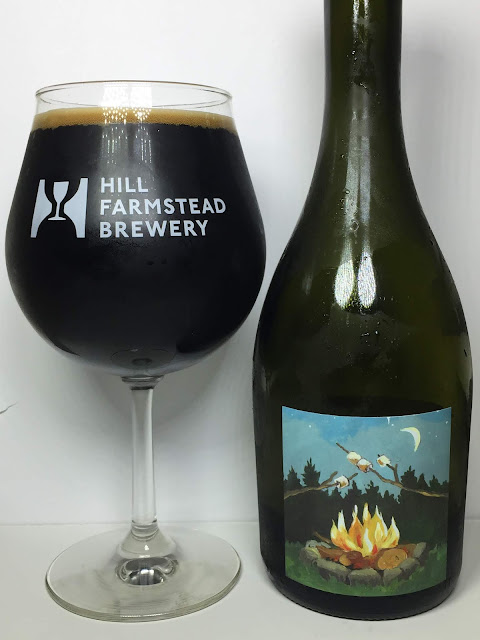 "An Imperial Stout made with marshmallow Fluff. Chocolate, cotton candy, and vanilla aromatics with flavors of marshmallow and dark chocolate."

So last December, I made an attempt to drive two hours north to Saco, ME for the Barreled Souls Stay Puft release. On a prior trip the year before, I visited the brewery on a Friday night and just casually walked in and saw they had the Barrel Aged version in bottles for purchase. Now, I applied this logic to this past December and figured that I could do the same for a Saturday release. I hypothesized that since the BA version lasted a few days, then the base beer would easily survive a few hours after opening this time around.

As I made the turn off of I-195 and onto U.S. Route 1, I was patting myself on the back for "outsmarting" everyone and getting to the brewery a full 20 minutes early in order to guarantee my allotment. I soon neared my destination and saw that beautiful wooden sign beckoning to me. It was at this moment that my admiration for my own advanced thinking was surpassed only by my utter astonishment at how poorly I had completely underestimated the hype.

Oh yes, packed into a relatively small parking lot fit for most insurance agencies were almost 100 of New England's finest beer enthusiasts waiting to suckle at the marshmallow teet known as Stay Puft and Peanut Butter Stay Puft. I swallowed what was left of my pride, found a spot half taken up by a snow bank, and got in line. Needless to say, I was about still 60ish deep even 20 minutes after opening when they announced the bottles were gone. Still, I got my pours and spent the rest of the day exploring the beer scene in the Pine Tree State.

Due to the unexpected demand, Barreled Souls announced they'd do another release and on a bigger scale. Upon hearing this, you bet your sweet ass I was going to guaran-damn-tee I would be left holding more than just my dick in my hand on this release day. So again, I made the drive one Saturday morning to the brewery and made sure I got there early enough to set myself up for success. 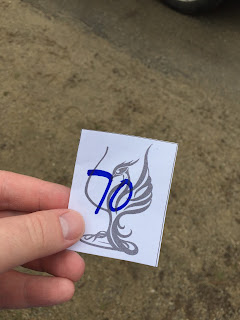 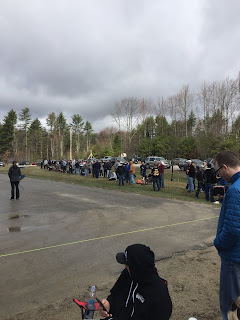 Luckily I was victorious this time around and walked away with this elusive beauty. After all the heartache and hype, what will I think of Stay Puft?

Pours out jet black and has some ruby red hues when held up to the light. A solid finger of dark brown head sits on top like the proverbial cherry on a sundae.

No surprises on the aroma as marshmallow inundates (what's with the $2 words?) my nostrils with a  vanilla and Fluff bomb. A nice helping of dark chocolate syrup and muted graham cracker notes bring the s'mores dream to life. I also get a fruity, cherry flavor too. Maybe this has some Russian Imperial Stout qualities to it, but I can see where the candy aromas are coming from on this one. As it warms, brown sugar, some toasted coconut, wood, and more of those fruity notes (now more strawberry) come to the front of the line. It is a decadent-smelling beer.

The taste is a little muted when compared to the flavors from the aroma, but they all still answer role call during 1st period History...

VOICE IN MY HEAD: You doin' ok?

...The Marshmallow Fluff is clearly the intended star and it has found a cozy spot on each one of my taste buds. There is some booze on the taste and it is a slight tick above "noticeable", but I'll allow it (Mills Lane voice) with a nearly 11% stout. Dark chocolate-covered cherries come at me next and make for a nice, romantic evening in my mouth. Some leftover oak and wood from the aroma pick up near the middle and even some tobacco and char come in for good measure. The back end come in with a refined alcohol taste and some moments of dark fruits, but the alcohol seems a bit too strong for my liking here, especially on the finish.

Mouthfeel is full and fluffy. Again, alcohol presence isn't shy, but I can power past it and forgive all sins. Being a big beer with boozy tendencies makes it a sipper, but the marshmallow and chocolate flavors are able to keep it in the dessert beer category.

Stay Puft has an intoxicating aroma and a flavor profile with solid dessert stout qualities and the alcohol to match. The s'mores experience was faithfully recreated, but I do wish the alcohol was dialed back a bit in order to have the taste match the aroma. Still, it's a dessert stout worthy of an after dinner indulgence.