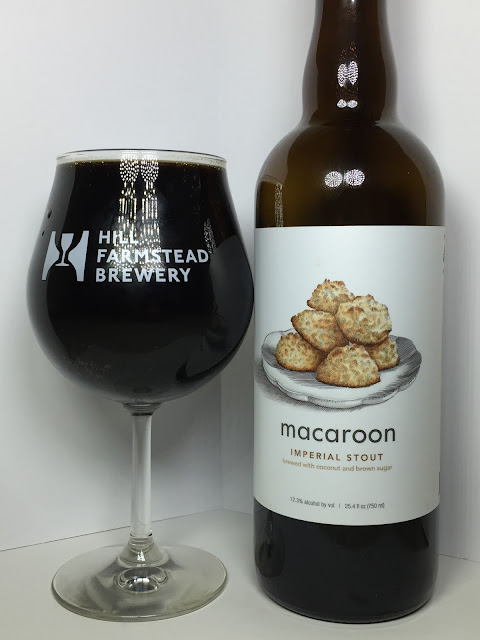 "We teamed up with our friends at The Veil Brewing Co. to brew the latest iteration of our dessert stout line: Macaroon, inspired by the delicious coconut pastry of the same name.

Macaroon presents an inky, opaque black and leads with a rich, wafting nose of coconut, chocolate milk, hazelnut, and marzipan. A thick, creamy mouthfeel is complemented by flavors of Mounds bars, powdered chocolate milk, and a chocolatey hazelnut. Macaroon is decadent, rich and drinkable."

Pours pitch black with light brown edges. The pour produced less than half a finger of brown head that disappeared instantly. There was noticeable sediment (I assume shredded coconut?) sitting on top and it left a film on the glass much like the lacing of the head would.

The coconut is here on the aroma, but it more subdued than I was expecting. Dark fruits and cherries are also noticeable as well as dark chocolate syrup and some vanilla extract. The brown sugar pops more here than the coconut does and there's even some cinnamon sugar to boot.

The taste really is an ideal playground for diabetes. It's a sugar overload, but it isn't enough over the line to make the beer too difficult to approach. It starts off with the promised coconut and a nutty flavor too. Some subtle cherries and bitter dark chocolate follow suit with hints of dark roast coffee. Incredibly sweet molasses and even some moments of soy sauce start coming into play with maybe some maple. Hints of plums and other dark fruits are also here, but they take a back seat to the sugary sweetness. I don't know, I think this one might be too sweet for me.

Mouthfeel is thick and mouth-coating at every turn. The 12% is nowhere to be found, so, props for that. This leaves the mouth sticky which causes a lip-smacking sensation after each sip.

Macaroon might be too sweet for its own good. It's so sugary that I think it overpowers the natural flavors of the coconut and the brown sugar. Hey, I love a Wilfred Brimley stout as much as the next person, but this one just didn't hit the mark for me. Sorry.