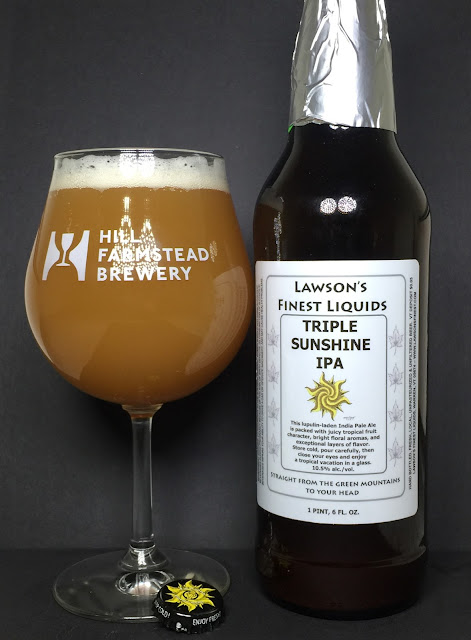 "This lupulin-laden India Pale Ale is packed with juicy tropical fruit character, bright floral aromas, and exceptional layers of flavor. Store cold, pour carefully, then close your eyes and enjoy a tropical vacation in a glass."

Pours a beautiful sunset orange with a completely murky body and a finger of white head.

Pure orange juice with acidity bursts from the glass to my nose. It's not very bitter, but a citrus hop presence is here as well as orange rind and grapefruit. It has a hop syrup smell to it, but at over 10%, it isn't surprising.

The taste is a showcase of sweet citrus. Mango and tangerine come to me first, but the overall flavor is a thick juice extract. Elements of both earthy and grassy hops are just as influential as the citrus as I get pine, moss, and tree bark as accents to the orange and grapefruit flavors. Like the nose, pure hop juice and syrup seem to be the go-to flavors on this one. This wasn't bitter on the nose, but a bitter hop presence is emerging here, especially on the end of each sip and it even lingers in the aftertaste. A heavy malt presence adds another layer of flavor, and given the overall sweetness, they probably used a lot of it.

Mouthfeel is full and thick at times, but again, it's an IPA clocking in at over 10%, so I am not going to act surprised. There is a touch of alcohol here and there, but it is not going to ruin the beer. That syrupy feel lets you know it is a Triple IPA, but in turn, it doesn't make it the most drinkable offering you'll ever see.

Triple Sunshine came as advertised: A massive Triple IPA with a thick body and plenty of sweet, citrusy hops. The hop presence was subdued due in part to the lupulin powder, but it didn't stop this from showing all the characteristics of a 10 % Imperial IPA. In comparison to other TIPAs, the lack of true bitterness helps with drinkability, but the massive nature of the beer itself still makes it a sipper. I'd say this is better than most Triple IPA's that try to go balls to the wall with the amount of hops as this was easier to drink, but was still flexing its muscles.