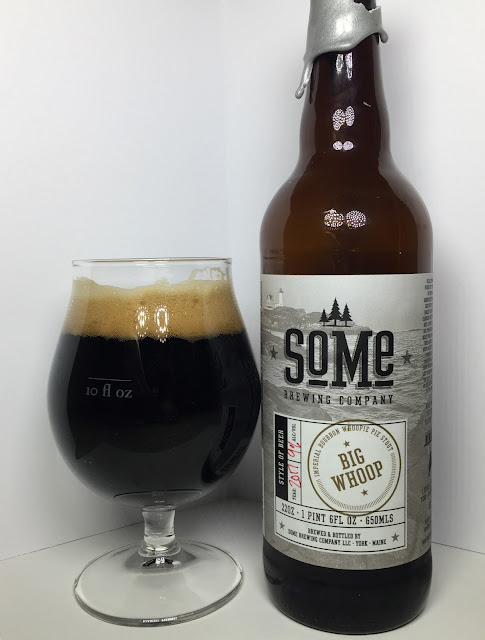 Pours out and sits pitch black in the glass. The pour produced a finger of frothy, mocha-colored haead.

The aroma is thick and full (if that makes sense). Lots of bourbon and chocolate up front. Some subtle vanilla sweetness and a good kick of oak. It's only when I take a big whiff does this marshmallow and malomar sensation come through. It's sweet with some nostril-warming booze. Smells great.

The taste is very chocolatey, almost overpoweringly so. My initial impression is a melted chocolate bar, but not so rich that it is a sugar overload. The bourbon is next and it is sweet with a boozy sensation that is luckily not a deterrent. Strong vanilla notes with some cherries add depth and then some barrel character of wood, tobacco, and some char kick things up a notch. As it warms, marshmallow fluff, some maple syrup, and some hollow milk chocolate (think 3 Musketeers) emerge to add even more dessert feelings to this beer. The back end is punctuated with dark fruits and some more of that refined booze.

Mouthfeel is thick, soft, and fluffy. The booze plays a role, but it is not a negative here. That body is so soft and smooth and despite a full, thick feel, it doesn't weight down the palate at any time.

Big Whoop was a big hit. I haven't reviewed the base Whoopie Pie Stout, but having had that several times, I can't believe these two beers are cut from the same cloth. The base beer is lacking in promised ingredients, but this beast is a work of dessert art. A chocolate and vanilla boom with big barrel character, Big Whoop delivers a BA dessert stout without giving you diabetes. Seven thumbs up!