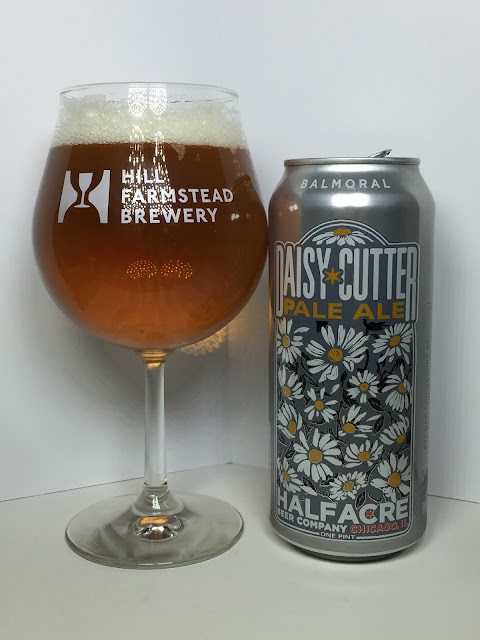 "Daisy Cutter Pale Ale is one of the first beers we brewed at our brewery on Lincoln Ave.  It began as a special release bomber beer, but caught fire both in and outside the brewery. At the time, 2009, there were some local pale ales that hit with natural power, but not many.  Daisy Cutter’s lush and dank characteristics steadily carved out a place within the Chicago brewing landscape.

Pours out dark orange/copper in color with a transparent body and a finger of white head.

An enticing aroma awaits with acidic grapefruit and black pepper spice. A fair amount of malty sweetness also contributes in large amounts as does pine and sap.

There's quite a hop presence here on the taste, which is impressive for 5.2%. It's bitter up front, bitter in the middle, and bitter in the back. At no point though is it ruining the palate. Like the aroma, noticeable spices and an overall herbaceous quality is present all throughout, but there is some room left for sweet citrus notes of tangerine and clementine. The pine is gone, but the malty sweetness is just as big here, but it doesn't become distracting at any point. Digging deeper I can find some melon and berries, which help combat some of the sweetness.

Mouthfeel is light-to-medium with a calm feel. A small amount of carbonation is in here and it finishes clean.

Daisy Cutter was a hop-saturated pale ale that flexed its bitter muscles to taste and feel bigger than its 5.2% abv. It's hoppy, sweet, flavorful, bitter, and easy to drink. Not much more to say, so definitely grab it if you can.