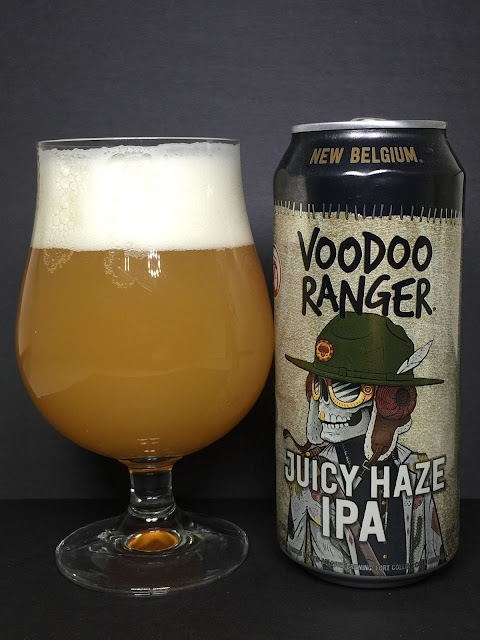 "Packed with bright tropical aromas and brilliant citrusy flavors, this unfiltered IPA wraps up with a pleasantly smooth finish."

Pours out golden orange in color with a hazy body and two fingers of dense, fluffy, white head.

I'm not sure about juicy, but this has a heavy grass and herbal influence that I really like. It's fresh and raw in its bitterness. Fresh flowers and potpourri also have a big impact. It actually reminds me a lot of Bissell Brothers Substance with a concentration of spice with some black pepper and cedar thrown in to boot.

The taste is more earthy than anything else. I'm reminded primarily of wet moss, tree bark, and some minor pine needles. The flowery notes from the aroma are dialed back a but and it has turned into something more reminiscent of perfume. Some subtle notes or orange juice and citrus come through after the earthy notes, but it is OJ without the acidity, which makes me feel like I am missing out on something. The middle of the mouth has a small drop of bitterness which shakes things up a bit. Actually, as this starts to warm up, I am getting a lot more (promised) juice as tangerines and some orange sherbet emerge. Directly behind those tender, juicy moments (don't make this weird) the malts start to come in and they are giving off a rustic, whole grain bread kind of taste. The finish and lingering flavor is delicious hop juice.

Mouthfeel is medium with a creamy texture. The abv is well-hidden and there's plenty of flavors to pick and choose from that make drinkability easy breezy. The hop bitterness lingers in the aftertaste and is a nice cap on top of everything else.

Voodoo Ranger Juicy Haze IPA started off as an earthy, spice bomb, but once the juice got started, it really dropped it into 4th gear. This was an incredibly complex flavor profile that I think can satisfy every color of the hop head rainbow and bring us all together in unity. Too deep? Ok, probably, but my point is that it's rare for a mainstream, widely-distributed IPA to wow the palate like so many smaller microbreweries do. I get something new on each sip, and when a beer can do that, then it is a home run.