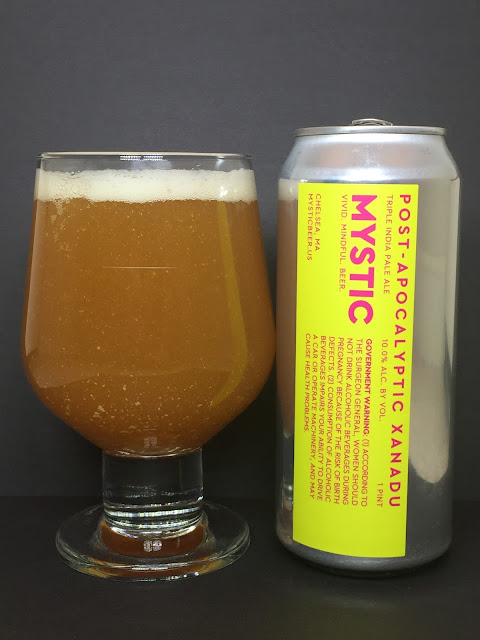 "This triple IPA is loaded with Citra, Mosaic, Simcoe, Summer and Ekuanot hops using a mixture of Lupulin Powder and pellets and has strong notes of Papaya and tropical fruit."

Pours out rusty orange in color with a murky body. Got some sediment in the glass, but we like it. I got a finger of white head.

The aroma is sweet and syrupy with a kick of pine. Lots of hop resin and a touch of booze.

The taste is equally hoppy and sweet. Clementines and tangerines kick in sweet fruit flavors, but it is just as big with its resin and pine. The amount of malts used must have been as big as the hops because this is unrelenting in its sweetness. It's not a knock against the beer, but hey, I gotta say it. At the end of each sip, a noticeable spice presence adds a real thud after each swig. I can't help but pick up a hard candy or Jolly Rancher flavor, which only adds to the other sweet flavors. There's a warm, gentle hug of alcohol on this one, but I welcome it here as it breaks up the resin and oils. Citrus acidity also plays a role throughout with some lingering sherbet tossed in for good measure.

Mouthfeel is syrupy, but there's enough carbonation to swiftly move it along the palate. As I said before, alcohol is slightly noticeable with some warming on each sip. This isn't trying to hide the fact that it is 10%, but it works well.

Post-Apocalyptic Xanadu was a big bastard of a Triple IPA with a surplus of sweetness and hops. It's a thick, syrupy, resinous, hoppy 10% beer that manages to be surprisingly drinkable and not too intimidating. You'll have to scrpae the hops off your teeth after each sip, but I enjoyed the ride.