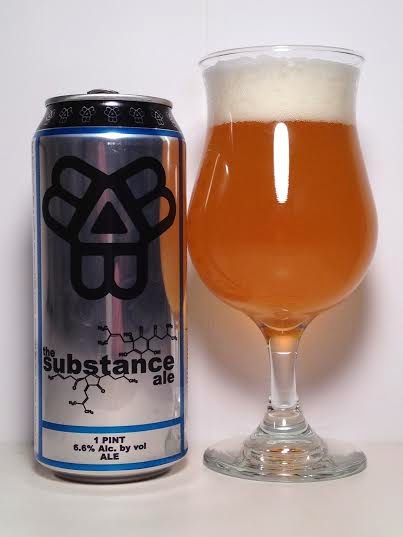 New England is home to some of the best beers in the country. Sure, Vermont might be at the top of a lot of people's lists, but there are some big things happening in The Pine Tree State. 1 Industrial Way in Portland, ME is currently housing some of the best up-and-coming breweries in New England and Bissell Brothers is one of them. The Substance Ale is Bissell Bros flagship beer - an American IPA brewed with Falconer's Flight, Centennial, Apollo, Summit, and Chinook hops.

Pours a pale orange with lots of carbonation coming from the bottom of the glass. It produced about two fingers of a white, foamy head.

The aroma is spicy hops with lemon zest and some garlic/onion notes.

If you're looking for a juicy IPA, then you've come to the wrong place. For a 6.60% IPA, this has quite the hop bite to it. It is noticeably bitter up front with characteristics of hop resin with garlic and onion. A big pine tree presence announces itself in the middle of my mouth along with those spicy Summit hops. While it isn't juice-forward, the lemony aroma is here on the taste to with a little orange juice concentrate/pulp flavor. It actually all balances out pretty well.

Mouthfeel is medium with the aforementioned carbonation bubbles making themselves known. Considering the hop variety and bitterness, I am easily pounding this one down since it is quite refreshing with some lingering pine and spicy hops.

I went into the Substance Ale thinking it would follow the way of a lot of New England IPA's and go with a dominant juicy hop profile. I got something different, but it was just as enjoyable. This is a hop-lovers American IPA as it's bursting with bitterness and it is very "New England" with it's pine aroma and taste. An excellent flagship beer from Bissell Brothers and I can't wait to try more of their offerings.