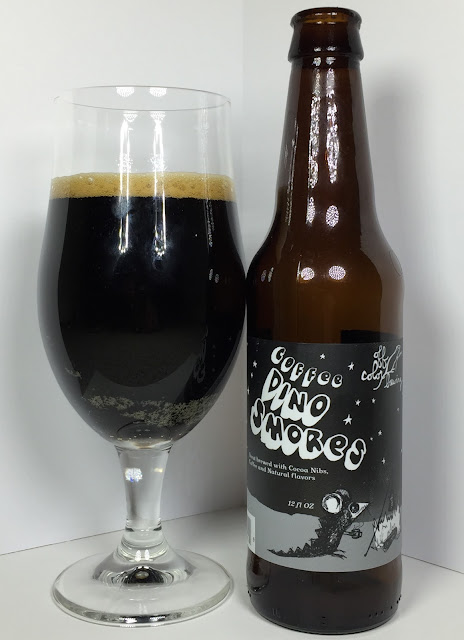 "Every year we team up with a different roaster to make new friends and see how different roasters and small businesses operate. We couldn't be more excited to be working with Passion House Coffee Roastersthis year. During cupping, we fell in love with two different coffees and how they both added something unique. So we blended them. The first bean, an heirloom varietal hailing from the Sidamo region in Ethiopia, provides floral notes and citrusy acidity.  The second bean, a mix of Bourbon and Catuai varietals from a microlot in the La Paz region of Honduras, gives a chocolatey sweetness and heavy body to the coffee....Then, we made an imperial stout with graham flour, marshmallow fluff, vanilla, and cocoa nibs with Amager and West Lakeview Liquors. "

Looks black in the glass, but it was the darkest shade of ruby red when I put a light behind it. I got less than a finger of light brown head.

Coffee on the aroma is not as big as I had anticipated as it yields a subtle, but deeply roasted character. The base beer is still here with dark chocolate syrup and vanilla. It smells like a Mallomar with trace amounts of coffee.

The taste produces a lot more coffee than the nose. It doesn't overpower the base beer and instead it adds a fresh roast taste with subtle pine and citrus. As for that base beer, more dark chocolate syrup is back from the taste and the vanilla, while present, is faded. Bitter coffee grounds and roasted malts emerge as this warms with dark fruits and maybe the smallest amount of marshmallow fluff. The big s'more flavors from the standard Dino S'mores are muted.

Mouthfeel is smooth with practically no carbonation. Bitterness sticks around after each sip, but the dessert flavors are surprisingly not cloying. Alcohol is nowhere to be found.

I was expecting for Dino S'mores plus coffee, but this was coffee plus Dino S'mores. Unfortunately the coffee itself isn't even that intense and the base beer seems to be missing in action. As a standard imperial stout it had black licorice and dark fruit notes, but as a big dessert and coffee beer it didn't come through all that well.