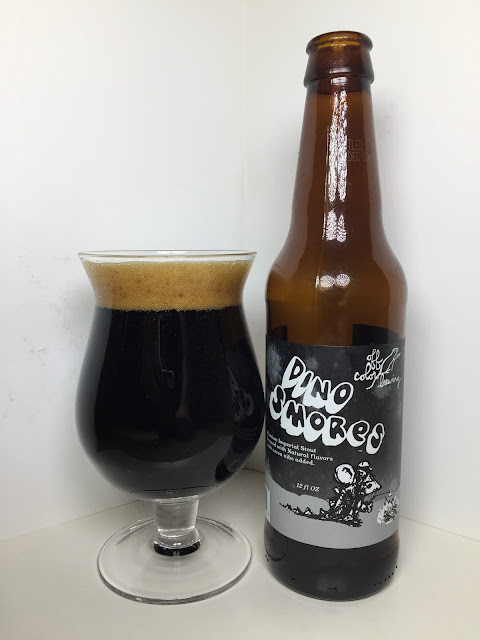 "When we launched BorrachaBaker made us some s'mores shaped like dinosaurs for our launch event. Then, we made an imperial stout with graham flour, marshmallow fluff, vanilla, and cocoa nibs with Amager and West Lakeview Liquors. Then, we brought this beer to the Brewpub Shootout and paired the beer named after the food with a food the beer wasn't named after. People were confused and named it best beer (or was it food?) at the Shootout."

Pours out jet black, but I do get some ruby red hues when I hold it up to the light. It poured to about one finger of light brown head.

As promised, this has an uncanny amount of vanilla and marshmallow exploding out of the glass. Graham cracker crust and subdued chocolate add to the dessert sensation. A sticky, sweeter, vanilla extract and molasses are also noticeable as are some subtle dark fruits and cherries.

The taste produces an interesting allocation of flavors on my tongue. The outer edges of my tongue are coated in marshmallow fluff while the middle is filled up with dark chocolate, and roasted malts. As this warms up, the vanilla and marshmallow turn into the aforementioned vanilla extract taste which causes some momentary double takes. The transition produces almost a nutty or even peanut butter taste that I am really into and more of the cherries from the aroma make for a nice cordial when combined with that bitter dark chocolate.

Mouthfeel is fluffy, but as thick as it should be for such a robust RIS at 10.5% abv. There's not one shred of alcohol and the dessert-like nature of the beer makes it drinker friendly and dangerous.