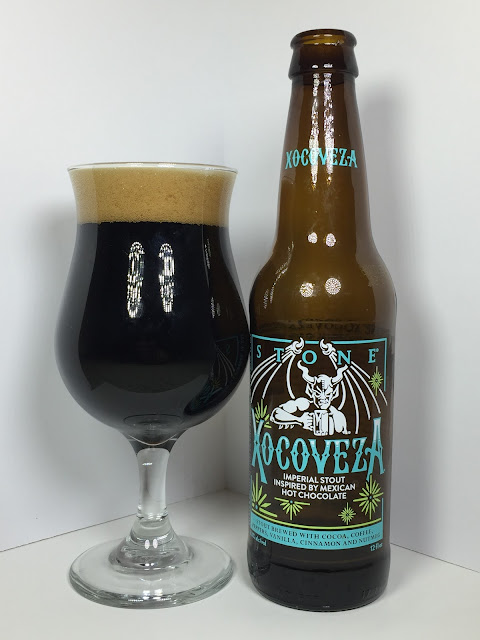 "...an insanely delicious take on Mexican hot chocolate brewed with cocoa, coffee, pasilla peppers, vanilla, cinnamon and nutmeg. First brewed in 2014 with San Diego homebrewer Chris Banker after his recipe won our annual homebrew competition, this imperial stout is layered with smooth roastiness, semisweet chocolate and a touch of spice."

Pours out dark brown and sits black in the glass with brown edges and a finger of khaki-colored head.

The aroma is dominated by cocoa powder and pepper skin. Spicy cinnamon isn't far behind, but the cocoa is borderline unrelenting in it's attempt to keep my attention. There's an underlying chocolate syrup presence mixed with some black licorice. Digging deeper, there's plenty of iced coffee to go around and some of that vanilla begins to come out more as this warms.

The tastes has tons of bitter dark chocolate that is a richer flavor than the cocoa powder from the aroma. Lots of roasted malts here too and much like the nose, the pepper skin is one of the biggest stars. The coffee provides bitterness too and it has the addition of a cream component which I will attribute to the vanilla. The overall theme is the taste being much more bitter than the nose (not a bad thing). One of the biggest differences in the taste is the onslaught of nutmeg at every turn. It was non-existent on the aroma, but it is clearly making up for lost time here as I am pretty sure I just deep throated a spice rack.

VOICE IN MY HEAD: "Deep Throating Racks" is one of my favorite films

I'm not getting cinnamon here on the taste, but all the spice presence goes to nutmeg, I guess. A tiny bit of dark fruit can be found if one looks deep enough and it helps sweeten out the spice cabinet in my glass.

Mouthfeel is perfectly suitable for the style, but with such a large amount of flavor and the style, I did expect a bigger body and more coating mouthfeel. Again, this is perfectly fine, but I was hoping for bigger.

Xocoveza leaned heavily on the nutmeg, but I still can't deny how complex and tasty this was. The nutmeg and spices did not eliminate all of the other hallmarks of what has become the "Mexican Hot Chocolate Stout" as coffee, chocolate, and even dark fruits were big and bold. This is a beer I readily grab every Winter and is one of, if not my favorite, Stone beer.

I previously reviewed the bourbon barrel aged version way back in 2015, but I found the base beer's flavors were obscured by the barrel aging. Turns out my instincts were correct as I will gladly take this version over the BA version any day of the week.