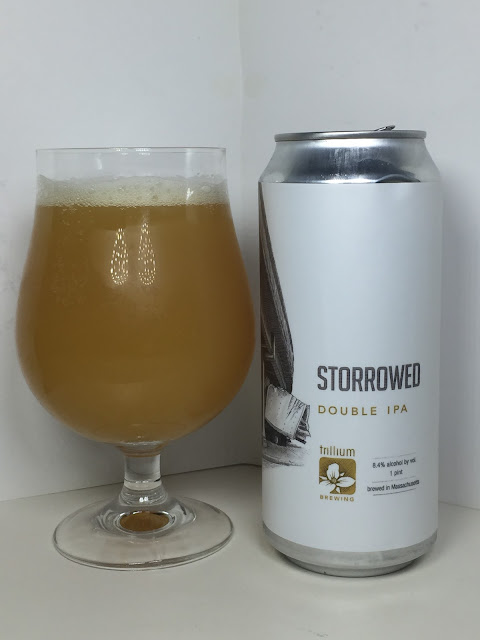 "Our latest Double IPA serves as a Public Service Announcement to warn against the Boston phenomenon of lodging a box truck under a low clearance overpass on Storrow Drive. While it's a sporadic phenomenon that can snarl traffic for hours, Storrow Drive claims most of its victims during college move in weekend, typically around Labor Day. Be sure to heed the Low Headroom Warnings at the Storrow Drive entry points!

Storrowed Double IPA presents as a deeply hazy, warm yellow/orange hue. Leading with a dank nose of sweaty pineapple, mangosteen, and stone fruit and follows with intensely juicy flavors of overripe mango, pear flesh, notes of grapefruit pith, and a background hit of raw sugar. That hint of sweetness is balanced by low bitterness to round out Storrowed as a smooth, delicious, drinkable Double IPA."

The appearance is a gorgeous sunset orange with a murky body and a finger of white head.

The aroma is an explosion of citrus and tropical fruits with a thud of dankness. Oranges, grapefruit, pineapple, melon, some sherbet, hop juice, and a small wheat presence. It smells great.

Vic Secret is basically Galaxy's baby brother and that rings true here on he taste. Dank hop bitterness is immediately noticeable up front with a lighter, refreshing lemon quality to it. Overly ripe peaches and a hefty amount of acidic citrus zest have a significant bite, but it isn't unrelenting. There's a lot of bitterness on the back end which is borderline cloying, but it lets up just enough to let in some sweeter notes of sherbet, tangerine, and even plantains. Overall though, the dank hop juice is what ties everything together.

Mouthfeel is full with a creamy texture despite the bitterness. The abv is nowhere to be seen and the aforementioned lighter side combined with a sweet finish make for easy drinkability. As I said before, the dank bitterness is always here which did leave some residual hop juice. It's noticeable, but it doesn't bother me.

Storrowed adds to the already stellar lineup of hoppy Trillium Double IPA's. In relation to recent new releases, this one stands out thanks to it's dank hop juice combined with lighter, zesty flavors and moments of sweetness. It's one of the more drinker-friendly hop bombs from Trillium in recent memory.